Sydney FC defender Jordy Buijs says he’ll be using Saturday’s atmosphere as a source of strength as he prepares for his first ever #SydneyDerby at ANZ Stadium (kick off 7:50pm).

Not one to shy away, Buijs said he relishes a derby, with the Dutchman having featured in countless encounters in his homeland during his career.

While the Sky Blues centre half isn’t entirely familiar with Saturday’s opposition, he labelled the clash as one of the standouts in the league.

“I know it is the biggest game in the country and that there will be a big crowd coming to the match,” Buijs said.

“They have said that there will be a lot of people coming to the game.

“The larger crowds give me more power and strength.  There are a lot of people watching and it’s good to show yourself to be a good player in front of this many people.

“Yes we had derbies [in Holland],” he continued.

“I think the supporters like them more and for them it means a lot, and for the players too of course, however we need to focus as if it’s a normal game.

“I have experienced Feyenoord vs Ajax, Heerenveen vs Cambuur and NAC Breda vs Willem II.  These are very good games and you do different things like training in the stadium the day before.  It’s a lot of pressure but I like this because it also gives me strength and power too.”

The Sky Blues are undefeated in their past nine derbies and Buijs, boasting past derby wins in his career, said he’s eager to experience that derby winning feeling against on Saturday against the Wanderers.

Buijs said he’s expecting a tough first encounter against the Sky Blues crosstown rivals as he said he’s looking to further endear himself to the Sky Blues faithful through his performances. 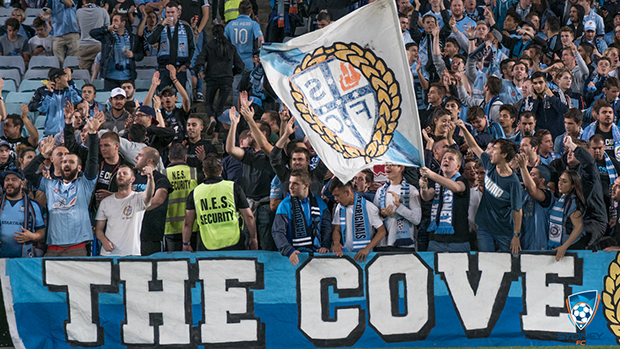 “It’s incredibly special to win a derby game, the feeling is one of the best you can experience as a football player,” he said.

“They are always special because everyone who is involved in this game will produce something special whether it’s players or fans.

“We have a good record in the Sydney Derby,” he continued.

“It is a good stat and means a lot to the team, however we start with 0-0 this time and need to focus on winning our own battles.

“I think it will be a very physical game but we need to keep everything simple and play our own game.

“If I play I want to play better and better and improve on my last performances and show myself to the Australian football people.”