Brosque Eyeing Round One Repeat

Sydney FC Captain Alex Brosque is hoping for of déjà vu in Saturday’s #SydneyDerby at Allianz Stadium as he called for a repeat of the Sky Blues round one performance against the Wanderers.

Brosque said the fact that the Sky Blues had a settled squad would play into their hand ahead of the encounter, while admitting there was no reason they couldn’t repeat the 4-0 thrashing they dished out in round one at ANZ Stadium.

“We’ve got a lot of players that have played in these games before and they’ve had a lot of squad changes from year to year,” Brosque said.

“They [Wanderers players] have been told about the game but unless you’ve played in these games a couple of times it’s hard to really gauge what it’s like and get a feel for it.

“We’ve got a lot of players that have been in these games a lot of times. Round one was all of that coming to the surface, while the performance wasn’t overly great we put them to the sword and scored four goals. We’re aiming at our home ground to do the same thing.

“There’s a reason we’ve been going so well this year, every challenge that’s been thrown at us we deal with so I think it’ll be the same on Saturday,” he continued.

“At the moment we’re on top and the Wanderers are seventh so they’re struggling. They’re struggling for form and goals and the opposite can be said for us, we’re unbeaten and scoring goals.” 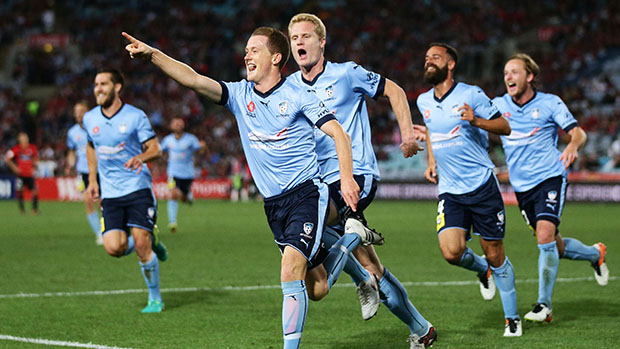 Brosque said the Sky Blues form in the derby to date, unbeaten in three years, made his life off the pitch in Western Sydney easier, while on the field he said he had no defensive concerns following Sebastian Ryall’s injury at the weekend.

“Our stats in the derby are fantastic, especially out west because I don’t have to cop anything from the Western Sydney people,” he said.

“I hope to continue that, it’s been a good run, this game is such a big game, it’s got everything that you want in Australian football matches. They’re always spicy, there’s always some bit of media that comes out in the week to get the sparks going.

“The fact we’ve gone over three years without losing to them, for me we aim to keep that going.

“With Seb being out it’s a big loss but I’m not really concerned at all,” he continued.

“We’ve got some great young players who have trained all year and been waiting for their chance and this will be their chance.

“To have someone like Wilko and Rhyan Grant alongside whoever comes in, they’ve played hundreds of games so it’ll be great, whoever comes in they’ve got 10 other players that’ll be helping them.”

Sydney FC take on the Wanderers in their only home #SydneyDerby of the Hyundai A-League 2016/17 season on Saturday 14 January (kick off 7:50pm). Be there to back your Sky Blues in this massive clash.