The Hyundai A-League Double winner said the contest would be competitive and said the Sky Blues’ past experiences against English Premier League opposition would play in their favour leading into the clash.

“I think we can [beat Liverpool],” Brosque said.

“They’re a great team in the Champions League next year and a huge worldwide club, but I think we gave Chelsea and Tottenham a good go two years ago.

“Liverpool coming here off a very successful season, they’ll be tired, they flew 24 hours after their last game, no doubt it’ll be a tough game but we’ll prepare for as we do for every other game.

“We’re going to just enjoy it, fresh off what we’ve done this year, I think it’s a good time to be playing a club like Liverpool, and we’ll throwing our best at it.

“I think it’ll be a competitive match played in good spirits. No one wants to go out and lose, both teams and sets of players have pride.

“It’ll be a very enjoyable match, they’ve got Steven Gerrard coming back and playing and for a lot of boys in the team that support Liverpool it’ll be great to be playing on the same field as him. It’ll be a great night for the club.” 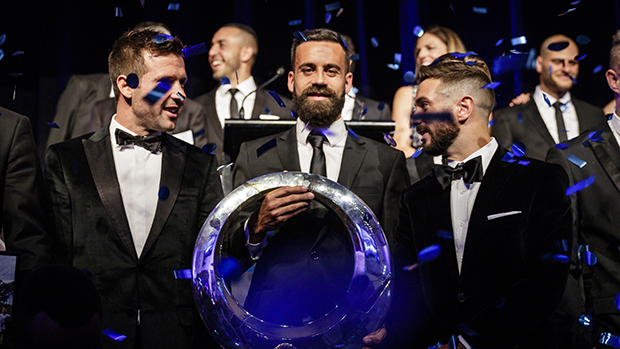 Fresh from re-signing with the Sky Blues for a further season, Brosque said a major incentive for signing on was all the accolades still be claimed in season 2017/18.

The Sky Blues Captain also said the retention of Golden Boot Bobô and Johnny Warren Medal winner Milos Ninkovic would aid in the club’s title tilt in the new season.

“This year was so enjoyable that to leave on a high would have been a great way to go out but looking forward there’s so much more that this team and club can do,” he said.

“I want to stay, commit and be a part of that. We’ve got the Champions League which we can have a real good crack at and it’s about being a part of that.

“There’s a good feel around the place based on what we’ve done this year. There’s a real sense that we can go on and continue that next year.

“We’ve retained most of the squad and we’re looking to add a few names as well and I think we’ll be even stronger next year.

“It makes a huge difference to how we’re going to go next year [keeping Ninkovic and Bobô],” he continued.

“Those two guys they did so well this year and were key to the run we went on and the double that we won. To have them again for next year makes it a lot more appealing for players that will be joining the club.”

Sydney FC take on Liverpool FC at ANZ Stadium on Wednesday 24 May (kick off 8pm AEST). Catch the match live on ABC2 or follow @SydneyFC on Twitter for updates.