Sydney FC Captain Alex Brosque has called for more of the same against Perth Glory, as the Sky Blues prepare for Saturday’s Hyundai A-League semi-final at Allianz Stadium (kick off 7:50pm AEST).

The Sky Blues have thrice defeated the Glory this season, scoring 11 goals in the process, and Brosque believes those past results will pay dividends for the Sky Blues heading into the clash against the West Australians.

“We’ve been going against them very well [in the past] and we’ve scored a lot of goals against them so for us it’ll be doing the same thing we have all season against them,” Brosque said.

“I think the goals scored against them will play on their minds. They’ll come here and know it will be a tough match.

“If they draw back on all three games played against them they were all tough games so it’s got to be on their mind. 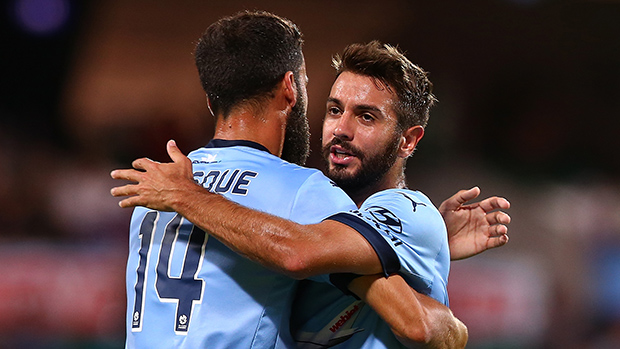 Brosque revealed Head Coach Graham Arnold’s message for semi-final week was one of routine, as he also confirmed that Serbian star Milos Ninkovic is on track to feature in the Grand Final decider at Allianz Stadium.

“Arnie’s message is simple, for us it’s a routine, not changing anything at all,” Brosque said.

“For us our training will be the same as it has been all year. We’ve had three good games against them and we need to use that to think that there won’t be any other outcome.

“Ninko trained yesterday and today and he’ll train ahead of our three day lead in so he’s fine,” he added.