After spending a season together at Shimizu S-Pulse between 2011 and 2012, Arsenal legend Freddie Ljungberg and Sydney FC captain Alex Brosque were reunited again on Friday.

In Sydney to promote Arsenal’s 2017 clash against the Sky Blues, Ljungberg and Brosque caught up after media commitments, with Brosque saying he was pleased to see his former strike partner again.

“It’s good [to see each other again],” Brosque said.

“Obviously Freddie is only here for a few days so it’s a quick trip for him but to have him here and see him again is always good and hopefully he’ll be back in a year’s time as well.”

The former Swedish international reflected fondly on the pair’s time together in Japan, with Ljungberg praising Brosque’s attributes as a player.

“We became very friendly, he’s a great man and his family is very nice as well, I really enjoyed spending time with them,” he said.

“When I played with him he was good going at the goal and had some speed so it was my job to feed him the ball and he’d sort it out.

“As a player, the league here is lucky to have him. I thought he could have maybe gone to Europe a little bit because I thought he had that quality.” 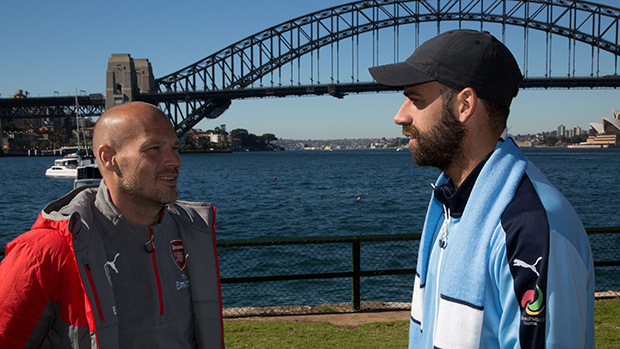 The duo expressed their excitement for the 2017 encounter at ANZ Stadium, with Ljungberg confirming Arsenal’s star players would be on show for the blockbuster on Thursday 13 July.

“To have a club like Arsenal come out with the quality of the players that they have is fantastic for a club like us to have them here,” Brosque said.

“We’re excited, it’s still a year away, but the tickets are on sale and to have the hype already starting is definitely exciting for us.”

“In general we [Arsenal] are very excited to come,” Ljungberg continued.

“I’ve noticed since I’ve been here that we’ve got a massive fan base here and people going a bit crazy which is nice.

“We will probably have a very, very good squad and I don’t see any reason not to have that.”

Sydney FC take on Arsenal FC in a blockbuster clash at ANZ Stadium on Thursday 13 July, 2017. Tickets go on general public sale on Tuesday 19 July, 2016. Get in quick for what’s sure to be a sell-out game!