Midfielder Josh Brillante will make his second start in a Sky Blue jersey at Campbelltown Stadium tonight, and is determined to remain there when the Hyundai A-League 2016/17 season starts in October.

Getting the first minutes in his legs against Earlwood Wanderers last Wednesday, Brillante wants to further impress tonight against Macarthur Rams, as he familiarises himself with his new team mates.

“I want to have a nice strong pre-season with the team, get fit, be ready to go and try to cement my spot in the starting eleven,” Brillante said.

“It’s important to have a good start to the season, carry that through and hopefully bring home some silverware.

“I’m not too familiar with a lot of the Sydney teams but I’m expecting a decent hit out against good players [tonight],” he continued.

“It was good for all the boys to have a hit out against Earlwood [last week], get the legs going and get used to playing with each other in a game situation.

“We want to make sure we’re all on the same page when it comes to the first real game.” 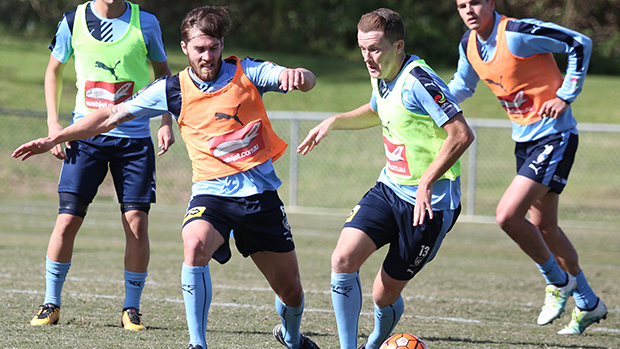 Brillante said the move on and off the pitch was going well as he praised the Sky Blues squad for aiding in his transition to life in Sydney.

“It’s been great so far, it’s been a good couple of weeks,” he said.

“It’s also been a tough couple of weeks, the coaching staff have been training us hard which is a good sign and all the boys are getting stuck in to training at a good intensity.

“I’m settling in well, obviously coming back home is easier but the group of guys here are really great and that makes it a lot easier to gel into the team when they help you out.

“So far the transition has been really good.”

Sydney FC take on Macarthur Rams tonight at Campbelltown Stadium (kick off 7:30pm). Tickets are available at the gate and are priced at $12 for adults, $5 for children and concessions and $25 for a family.