Sydney FC midfielder Josh Brillante is eager to reach peak fitness ahead of next month’s Westfield FFA Cup Round of 32 clash away against Darwin Rovers.

The Sky Blues midfielder, returning from his pre-season break, said the body had fared well so far in his first two hit outs, and he’s eyeing further improvement in tomorrow night’s friendly clash against Macarthur Rams at Campbelltown Stadium (kick off 7:30pm).

“The body is feeling pretty good, it’s been a few weeks now with a couple of games under our belts,” Brillante said.

“Last year the big thing with our game was our fitness and having five weeks off ahead of pre-season we’ve lost a little bit, but the general fitness is still there overall and we’re picking up from there.

“I think it’ll be a few more weeks [before I’m fully fit]. Going into the first FFA Cup game in a couple of weeks I think the body will be close to being able to handle a good 90 minutes and then from there it’s about pushing and working harder in those 90 minutes.

“We want to get more fitness out of tomorrow night’s game, it’s still pre-season so that’s still important,” he continued.

“It’s about getting used to being sharp on the ball and in sync with everyone, stringing passes together and scoring goals.

“All the boys are getting their fitness back and looking pretty sharp.” 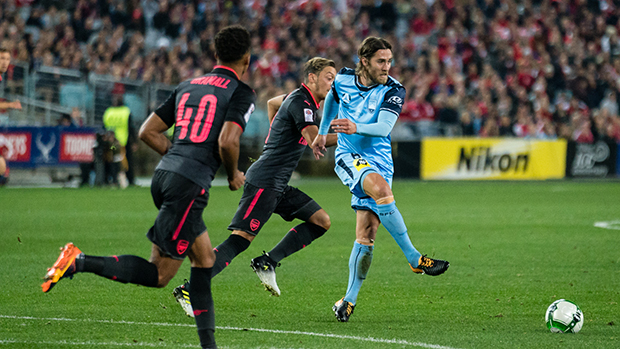 One year on from one of his first hit outs for the Sky Blues, Brillante reflected on the year that’s been, as he praised current new boy Paulo Retre for the way he’s slotted into Head Coach Graham Arnold’s squad.

“It’s crazy to think what we’ve done from a year ago to now,” Brillante said.

“Last year we had a good pre-season and we’re looking to do the same thing. We’re looking to put in a good solid performance [against Macarthur], get used to each other and play some good football leading into the FFA Cup game in a couple of weeks.

“Paulo has slotted in nicely, he’s a good young player, the same age as me,” he continued.

“He’s fitted into the team really well, he’s good with all the boys and a good footballer which is the main thing.”

Sydney FC take on the Macarthur Rams at Campbelltown Stadium on Tuesday night (kick off 7:30pm). Follow @SydneyFC on Twitter for live updates.