Sydney FC midfielder Joshua Brillante said his midfield partnership forged with Brandon O’Neill is helping his transition to life at the Sky Blues.

The duo live together, and Brillante believes the bond between the two is paying dividends on the field and aiding in the Sky Blues attacking style of play.

“Brandon and I live together so we’re always talking and chatting,” He said.

“In training we’re always working and playing well together so [our partnership] has been great so far.

“I feel really comfortable within the team and under Graham. Within the group of boys I fit in really nicely,” he continued.

“It’s really easy to play with these guys and the positive attitude they’ve got makes it a lot easier.

“The style of nice attacking play that we’re doing, we’re really working on that in training and I think that started to show last night how far we’ve been coming.”

After progressing through to the Westfield FFA Cup Semi Finals on Wednesday night, Brillante is confident the Sky Blues can claim their first piece of silverware in 2016.

The former Fiorentina midfielder said the squad’s mentality at Sydney United Sports Centre aided in the Sky Blues progression past the potential banana skin, as he praised the attacking power on offer up front. 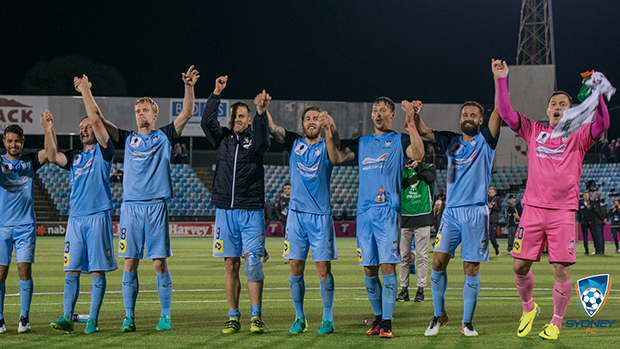 “I think we can go all the way with our team and the quality of players we’ve got,” he said.

“I think we can bring home some silverware. We’re through to the semi-finals but there’s still a lot more work to come, a lot more training and preparation for the next games.

“I think it was a great team performance [last night],” he continued.

“All the boys had a great attitude going into the game and that was shown by the way we played.

“It helps out a bit more when you’ve got the quality up front. The likes of Bobô, Brosquey, Ninkovic, they’re all great players and for us midfielders it makes it a lot easier.

“The first game of the season is only a couple of weeks away now and we’re all ready to go.”