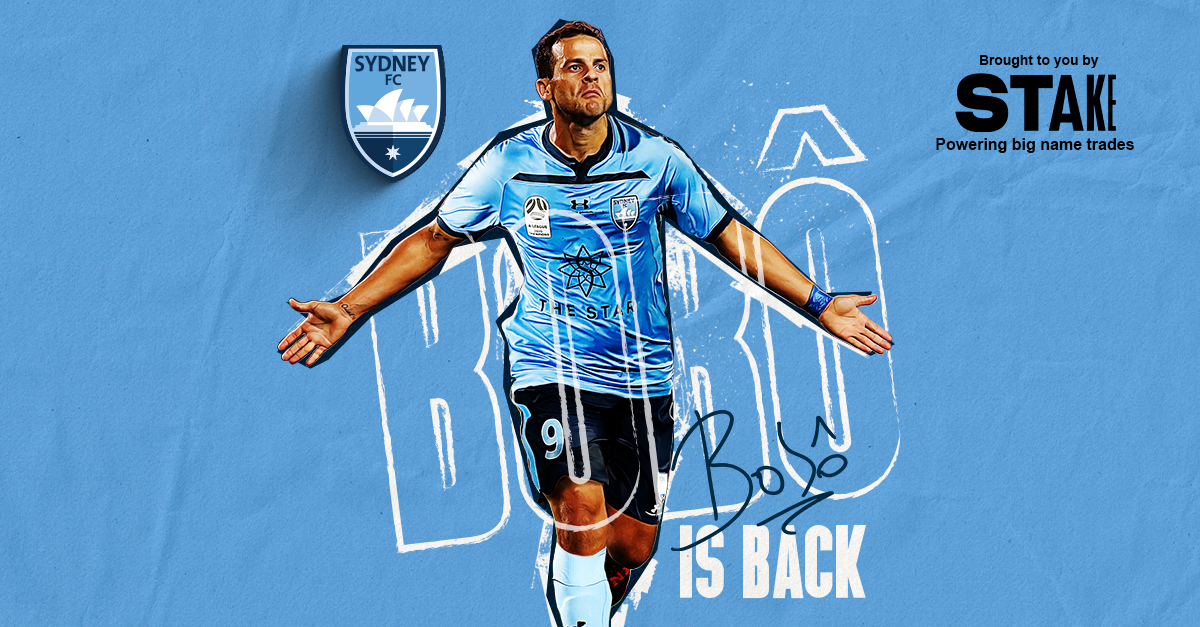 The A-League’s most prolific striker, Bobô, will re-join the Sky Blues for the 2020/21 season as Sydney FC go for a record-breaking ‘Threepeat’ with a third consecutive Championship in sight.

The A-League’s most prolific striker will re-join the Sky Blues for the 2020/21 season as Sydney FC go for a record-breaking ‘Threepeat’ with a third consecutive Championship in sight.

Head Coach Steve Corica has now finalized his squad ahead of kick off against Wellington Phoenix at WIN Stadium on January 2nd, when the Sky Blues will begin the quest for the unprecedented achievement.

Brazilian Bobô leads the A-League in the goals per game stats (0.737), and will return to the Sky Blues with whom he broke the record for most goals in a season in 2017/18; finding the net 27 times in 27 A-League games and 36 times in 37 matches in all competitions*.

He was Sydney FC’s Player Of The Year in 2017/18 and says he’s thrilled to be coming back.

“I enjoyed every moment of my time at Sydney FC, we had a hugely successful two seasons and I want that again,” he said.

“The club has hardly missed a beat since, winning both A-League titles and the Premiers Plate and I can’t wait to go for three in a row.

“My family and I still feel like Members of the Sky Blue family and for us this is like a journey home.

“We are looking forward to seeing everyone, particularly all of our Members again, and to get going on another exciting ride.”

Bobô has arrived in Australia and is currently quarantining but is expected to be out in time for the Sky Blues first home game of the season against Western Sydney Wanderers at Stadium Australia on Saturday 16th January.

Head Coach Steve Corica is delighted to be re-signing a club legend.

“It’s fantastic we’ve been able to bring Bobô back and I hope it will excite our Members,” he said.

“His goalscoring record is phenomenal and it means we’ve now got excellent competition for places among our strikers.

“The experience he brings will also benefit our young forwards who we want to develop, and they will learn a huge amount from him.

“I’ve no doubt we’ll see plenty of goals when he plays as he is a proven scorer and will get plenty of service.

“It’s a real coup for us, he’ll bring a point of difference and an even sharper edge up front.”

The frontman hit 52 goals in 71 appearances during his previous spell with Sydney FC.

This transfer is brought to you in partnership with Stake.

From the world game to the world’s market, trade US shares commission-free on Stake.