Bobô will join recent re-signing, club captain Alex Brosque, in the squad that travels to Perth, as Arnold rejoiced at having the Sky Blues’ number 14 back for a further season.

“Bobô is settling in well and we expect him to play tomorrow night,” Arnold said.

“Bobô is a player with a fantastic pedigree and great CV. He’s a fantastic guy, he’s fit in perfect, we’re expecting big things from him and I’m sure he’ll deliver.

“Brosque has worked extremely hard in the offseason to get fit and he’s looked great at training,” Arnold continued.

“His absence last year showed how important he is to the team and the club, and I know he’s a fan favourite at Sydney FC. He is Sky Blue through-and-through so it’s fantastic to have our leader back.”

The Sky Blues are looking to reach the quarter finals of the cup for the second time, and have never lost a game away to the Glory under the tutelage of Arnold.

The Sky Blues’ boss has his sights set on claiming all three trophies on offer and Tuesday night presents the next step in achieving that goal.

“[Tuesday’s match is] hugely important, there’s a trophy on the line and we want to be challenging for all three trophies this year,” said Arnold.

“It’s a game we’re looking forward to. We’ve always had quite good success over there in Perth but it’s going to be a tough game.”

State-level teams are often fitter at this stage of the competition as it coincides with their leagues, while Perth will be at a similar fitness level to the Sky Blues.

This, coupled with both teams’ history in the cup, mean Tuesday’s clash will be an attritional spectacle. 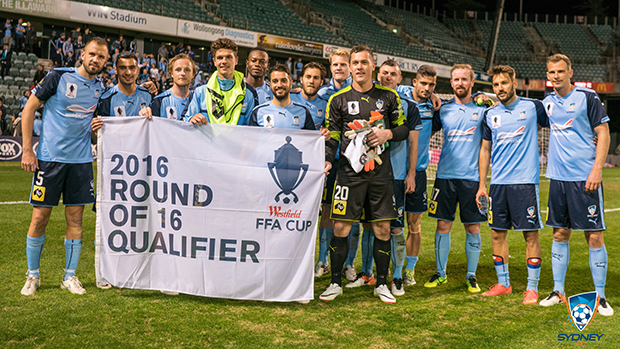 “It’s three weeks ago now that we played Wollongong and we’re three weeks further down the track, fitness-wise,” said Arnold.

“At this stage in the FFA Cup, playing away against state-league teams that have got 20-odd games under their belt, they’re more match hardened than the [Hyundai] A-League teams.

“But coming up against Perth, the fitness levels of both teams will probably be very similar and it’ll get down to the best performer on the day.”

Sydney FC face Perth Glory at Dorrien Gardens in the Westfield FFA Cup Round of 16 on Tuesday 30 August 8.30pm AEDT. The match will be streamed live on foxsports.com.au