Bobô and Campbell spoke of the excitement at the clubs and among fans at the official countdown launch.

“It’s going to be good to embrace world football, Arsenal haven’t been here for 40 years so to reaffirm that and start that again is good.

“The players are looking forward to this game and they want to make a good show of it. Hopefully it’ll be a competitive game as well.”

Sydney FC’s marquee player, Brazilian striker Bobo, said: “Having one of world football’s leading clubs coming down under to play Sydney FC is a fantastic opportunity.

“This game allows us to showcase our potential on the world stage, as well as giving our younger boys a valuable learning experience.”

The pair were also joined at the Opera House for the launch by NSW Minister for Tourism & Major Events, Adam Marshall, who welcomed Arsenal’s tour of Sydney as a major win for football fans.

“The NSW Government is proud of its continued success in attracting major events to the State and securing the visit of global football power Arsenal to Sydney will continue to showcase our major events capabilities to the world and help us drive economic growth,” Mr Marshall said.

Sol Campbell is known as an Arsenal “Invincible”. In a celebrated career at the Gunners, he won six major trophies with the club, and he was a cornerstone player of the side that went an entire Premier League season unbeaten in 2003/04. 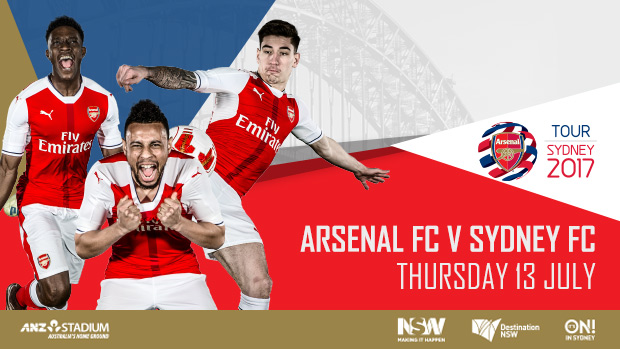 Tickets are available across all categories, and prices start from just $39.

Further information regarding the week-long schedule of events around the Arsenal In Sydney Tour is available at www.arsenalinsydney.com. To get tickets now visit Ticketek here!