Sydney FC midfielder Brandon O’Neill believes there’s nothing like the Big Blue, with the 22 year old saying the clash characterises the Hyundai A-League.

Preparing for Friday night’s massive encounter at Allianz Stadium, O’Neill said the Sky Blues are preparing for a battle while quietly confident of accruing another three points over their Victorian rivals.

“You know what you’re going to get from the game, you have to be switched on and at your best.

“We’re in a really good position at the moment where we’ve got massive belief, we’re really confident and we can’t wait to step on that pitch on Friday and get the three points. We’re chomping at the bit to go out there and to win that game.

“There’s a different feeling this season leading into the game because we know what’s at stake. We’re more excited about this game than previous ones gone by.

“We’re just hoping we can get a massive crowd, a massive fan base to Allianz, they can support us and be our 12th man and cheer us on when we win.

“It’s first versus second and we know three points would go a long way. We’re getting ready for a battle and to take three points.” 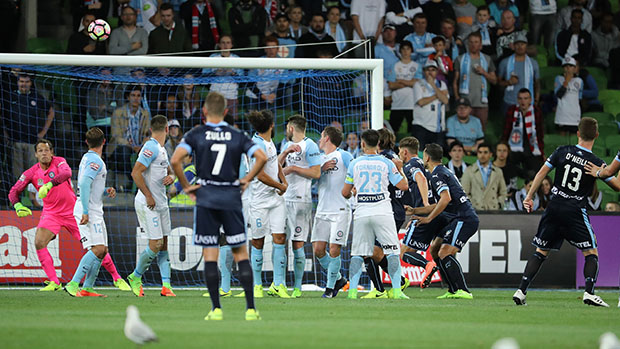 Not previously known as a free kick specialist, O’Neill has credited his Sky Blue teammates this season for giving him the confidence for his now trademark set piece goals.

O’Neill has twice curled the ball up and over the wall and into the top corner to get on the scoresheet, and the midfielder sad it’s a part of his game he’s been working on.

“It [taking free kicks] is something that I like to do whenever I get the chance in the game,” he said.

“I just find that whenever it’s on the edge of the box and back a little from the edge, I think if I can put it in an area where the keeper can’t get to it it’s always a chance and I just have to thank all the lads for giving me the confidence to step up and have a go.

“I’ve never really been known for it or I’ve never really stepped up to take them in any other team or position, but this season and last season I’ve been lucky enough to be given the opportunity and I enjoy it. Hopefully there’s many more to come.

“I was very proud to score another goal for Sydney FC [last Friday] but more importantly it was about getting the three points and I’m more delighted with that.

We went in with a plan to get the three points and get back to winning ways and now we can kick on for the rest of the season and hopefully achieve our first goal of winning the Premiers Plate.”