The Best Squad We’ve Had – Zuvela

Sydney FC midefielder, Chris Zuvela, said this year’s crop of youngsters is by far the best he’s played with, as the talented midfielder sealed promotion to the PlayStation 4 NPL 1 NSW Men’s competition at the weekend.

The 19 year old has been a feature of the Sky Blues Foxtel National Youth League squad for three seasons and was an integral figure as Head Coach Rob Stanton’s outfit that won the Championship in 2016.

“This is definitely the best Sydney FC youth team I’ve been in,” said Zuvela.

“We all just gel as one, we have that connection between each other and a bond that’s like no other team I’ve been in.”

August has been a hectic month for Sydney FC’s NPL 2 teams, with the First Grade and U20’s sides triumphing in their inaugural seasons.

With promotion secured, Zuvela said he was eager to silence the critics in NPL 1 after they had written off Sydney FC at the start of the NPL 2 season.

“I can’t wait to take that [challenge] on and see how we go,” said Zuvela.

“Everyone doubted us and thought we wouldn’t do well in NPL 2 but we showed them.

“So we’ll show everyone else again next year in NPL 1 that we’re not just here to make up the numbers.” 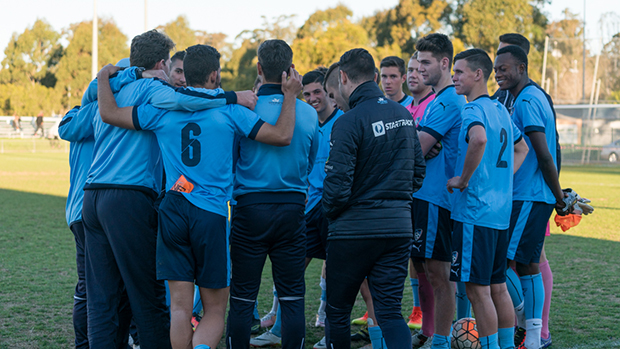 Sydney FC’s NPL 2 Men’s contested the final game of the regular season at the weekend with a four-all draw against local rivals Western Sydney Wanderers FC.

The gripping encounter swung like a pendulum, with Sydney’s Charles Lokolingoy opening the scoring in the first minute, before the game ended with another 7 goals.

The Sky Blues’ number 17 spoke about the team’s achievements with pride, but said he is fully focused on the upcoming finals series.

“Obviously the National Youth League is exciting because it’s so important for our development,” he said.

“But I don’t want to look too far ahead because I still have a job to do for the NPL 2 team and that’s the main task.

“I’m pretty happy with the season at the moment, we just need to keep pushing on in the finals.”