As the countdown to the on-sale date of 19 July 2016 continues, ticket prices for the hotly anticipated 2017 clash against English Premier League giants Arsenal FC have been confirmed.

Starting at just $39, prices have been kept affordable to ensure as many football supporters are able to attend the match, with family tickets of four available from $99 and more than 50 per cent of all tickets priced under $99.

The northern stands of ANZ Stadium will be transformed into the club’s celebrated North Bank for Gunners fans with the Sky Blues’ supporters taking over the southern stands, which will become The Clock End – just as it is at Emirates Stadium in North London.

As it is anticipated to be a sell-out match, if you want to secure your seat earlier than the public, become a Sydney FC 2016/17 Member to ensure your access to the exclusive Members’ ONLY pre-sale period on 15 July. You can become a 2016/17 Sydney FC Member here. 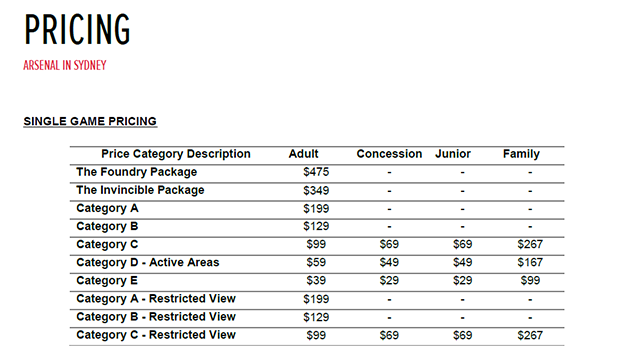 For more information about the game, and all the latest news, visit www.arsenalinsydney.com.au.