Anticipating quick, direct play from the Japanese, Arnold said he’d ensure that his players are well drilled in what’s required from them on Wednesday night.

“We’ve analysed Urawa Reds, we’ve had a look at them on the plane yesterday,” Arnold said.

“Whatever we do tactically, we won’t go too far away from what our principals are but we’ve got to make sure the players understand.

“We may change our system a bit here because Urawa Reds play a different system to a lot of systems these boys are used to. It’s a 5-4-1 out of possession but in possession it turns to a 4-1-5 so they try to get players in behind the backline quite quickly so we’ll look at a different system.

“If you take the names away it’s the mobility of the Japanese players [that is most threatening],” he continued.

“I experienced it when I was coaching over here for a while. Their mobility is very good, their central striker is a big Slovenian boy that holds the ball up and brings others in to play.

“You have to come over with the right positive attitude of getting the job done. If that can be three points fantastic, if it’s a point it’s better to start with something, but we’ll definitely go out with a proactive mentality to nullify their strengths and exploit their weaknesses.” 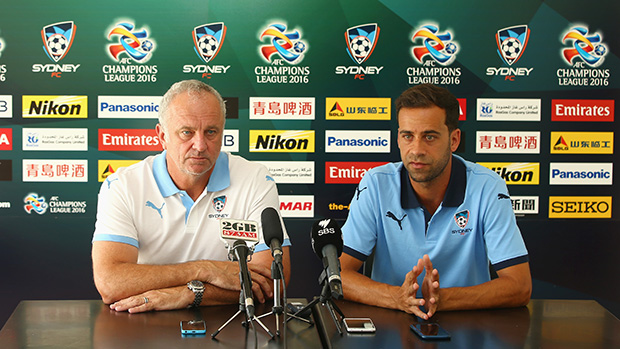 Arnold said he’s excited by the challenge ahead as he confirmed that along with Jacques Faty and Filip Holosko, three more players remained in Australia to be ready for Saturday’s away encounter against Melbourne Victory.

“The best time to get the East Asian countries is around about now because they’ve only had a few preparation games, the J-League starts next week,” Arnold said.

“Maybe it would have been better to get them at home while they’re not 100% in form but it represents a great challenge and for Sydney FC it represents the first time we’ve played Asian Champions League since 2011.

“I feel excited about a totally different challenge on Wednesday night and I’m sure the players are like that as well.

“Players left behind are Jacques Faty and Filip Holosko, David Carney, Matt Simon and Brandon O’Neill because he copped a cork late in the game that the medical staff felt with a quick exit out of Sydney for the flight that it wasn’t safe to travel,” he continued.

“Carney has only been with us for a couple of weeks and we’ve made him shed a few kilos in those weeks. Carney put a lot of effort in to the game on Saturday night, he’s an older player and we just felt it was better that he stays behind and gets ready for three games next week.”