Arnold’s Premiers boast an impressive home record at the ground, going the entire season undefeated there whilst only conceding three goals in the process, and the Sky Blues boss is expecting that run to continue in Sunday’s showpiece event.

“We’ve played [at Allianz Stadium] many times this year, we played 14 games on it this season and conceded only three goals,” Arnold said.

“All I know is what the players love and that’s when they walk down the tunnel to a big crowd onto what is the best football pitch in this country.

“In terms of stadiums the atmosphere is electric, the crowd is close, and we look forward to playing on that stadium.

“It’s about us, we’ve shown that wonderful attitude for 28 rounds, “Arnold continued.

“When everyone thought that four weeks before the end of the competition when we’d won the Premiership we’d take off our pedal and relax we created history by getting the most points ever in Australian football history as well as the best defence ever.

“It’s about character and resilience, to keep that record the way we did with most clean sheets and only 12 goals against shows you the mentality and character of the players.

“We’re just confident that we expect to win.” 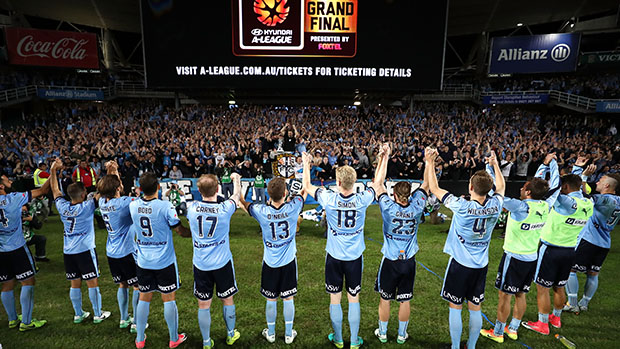 Arnold provide an update on Bernie Ibini’s situation after the winger was forced off late in the Sky Blues semi-final, while confirming the playing group was mentally and physically prepared for Sunday’s clash.

“We’ll give him right up until the last minute to prove his fitness and he deserves that because he’s come back from Belgium, he’s had a long period of the injury he’s had to get over and he’s had only sparingly minutes over the year.

“His commitment and attitude has been spot on so he deserves that opportunity.

We’ve played against them three times before as we have against every other team in the competition, and it’s all about Sydney FC , all about what we do and we just have to make sure our preparation is spot on like it has been for the last 28 rounds, the players are fresh and ready to go.