Graham Arnold hailed Sydney FC’s fighting derby draw “outstanding” and expects they won’t drop below that level of performance for the rest of the season.

The Sky Blues stretched their unbeaten run against fierce rivals Western Sydney Wanderers to seven games after a thrilling 1-1 draw at Allianz Stadium on Saturday night.

Arnold felt the Sky Blues “had enough opportunities to win two games” and was delighted with the response after their dismal showing in the loss to Perth last weekend.

“I just said to [the players] that is the minimum every week. I don’t want anything less,” Arnold told reporters afterwards.

“That’s why I was so disappointed last week. I probably went off my brain for the first time since [I was coaching] Northern Spirit I was that angry after the Perth game.

“I put players out there that were prepared to fight and fight for Sydney FC. Sydney FC is a fantastic club, has a wonderful family of owners.

“The players get everything off the field. They get paid early…I’m used to getting paid late or not at all. The players need to respect that and today they showed exactly what they are capable of. We should have won the game.”

The Wanderers came out of the blocks faster and took a 13th minute lead via a Dario Vidosic header before a Scott Jamieson own goal nine minutes before the break tied things up.

It was end-to-end action in the second half as both sides had excellent chances to win it but failed to capitalise.

“We had enough opportunities to win two games,” Arnold lamented.

“We didn’t finish them off but overall it was a real good performance from a team that fought very hard.

“Once we went down 1-0, their two Spaniards were playing good balls in behind so I needed to get some pressure on the ball and the only way I could do that was to push [Milos] Ninkovic higher and get Brandon O’Neill basically tracking [Mitch] Nichols.

“After we did that I thought we were the better side.” 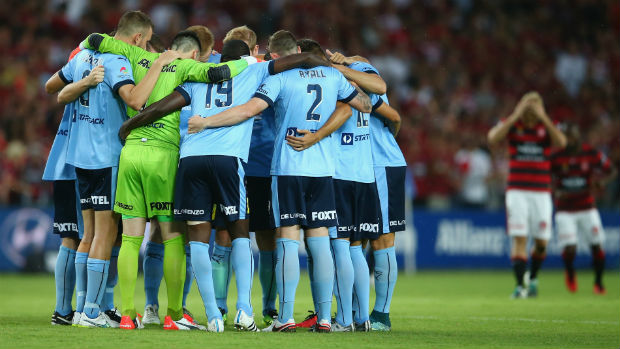 The Sky Blues fly out for Japan early on Sunday morning for their AFC Champions League clash against Urawa red Diamonds on Wednesday night, before a vital Big Blue against Victory in Melbourne next weekend.

Arnold admitted the hectic schedule will stretch his squad but has vowed to respect all competitions.

“Last year when Brisbane were in [the ACL] they played a youth team in the back half of the [A-League] season which I thought was not right,” he said.

“But for us we will play our strongest line-up available every week. It’s important we freshen up well.

“The atmosphere in the dressing room is very positive and I thought it was a good performance and a payback for the performance of last week.”