Arnold Out To Extend Home Run

Sydney FC Head Coach Graham Arnold is out to extend the Sky Blues undefeated run at Allianz Stadium on Friday night as he hosts Melbourne in Big Blue III for season 2016/17.

Amid all the talk of being in touching distance of the Hyundai A-League Premiers Plate, Arnold said he was focussed only on Friday’s clash as he called for as many fans as possible to turn out and back his Sky Blues with six matches remaining in the regular season.

“The only thing we’re looking at is winning the game on Friday night,” Arnold said.

“It hasn’t been discussed [winning the Premiers Plate] and it hasn’t been thought about. We set our goals at the start of the year, 58 points is what we’re looking at and the rest will take care of itself.

“We’ve got a good game coming up on Friday night and one that I appeal to all our fans to get out there, they can be our 12th man for us and help us bring them a trophy

“For me it’s just a Round 22 game. We’ve got four games at home out of our last six, we’ve done exceptionally well away from home all season, we’re undefeated at home and we expect that to continue on Friday.

“It’s a game that we’re looking forward to and very confident that we’ll win.” 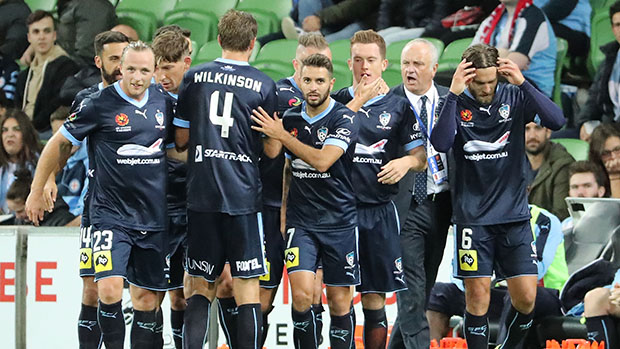 The Sky Blues boss attributed his side’s phenomenal season to the belief within his squad, as he praised his side’s stingy defence by crediting it as a collective team effort and not just that of the back four.

“I know that with us our confidence is really high and our trust in each other and belief in what we’re doing,” Arnold said.

“The belief the players have in each other when they walk on the park is enormous. Belief is probably the biggest thing when it comes to a group of human beings performing together. We have that belief at the moment and the belief will continue.

“We defend as a team, we’ve got 11 players that defend on the field,” he continued.

“We defend from the front, there’s been a huge percentage of goals we’ve scored this year come from pressing high up the field and winning the ball back in the opposition’s half and capitalising on their mistakes.

“That takes pressure off the midfield and backline and through to the goalkeeper so it’s a team effort.

“Mentally last week it was a great reaction after what we felt was an unjust result in the Derby the week before.

“The reaction was fantastic and we move into the last half a dozen games before the Finals Series, so it’s about getting better and better because the games are getting bigger and bigger.”