Arnold Out To Create History

Sydney FC Head Coach Graham Arnold has challenged his undefeated squad to be the best ever in the history of the Hyundai A-League.

The Sky Blues juggernaut shows no signs of stopping, and with a ‘Mates Night Out’ clash at Allianz Stadium against Wellington on Thursday, Arnold heralded his star laden squad while saying they still have another gear to step up to in their performances.

“I had a chat to the boys on Monday, we’re two thirds of the way through the competition and there’s no trophies yet,” Arnold said.

“We’ve had 18 games, we’ve done well but we can do much better. The ambition and drive when you get to this situation is to be the greatest team in A-League history. That’s what we’re striving to be.

“The players fight for each other, there’s a will on the field and there’s a lot of trust in this team. Even when the chips are down a little bit, you’ve got three or four players putting their body on the line to stop a goal and that shows you the passion and commitment of the team to each other.

“Overall if I sat with individual players and asked them about their performances they’d think they’ve still got a hell of a lot to give and they’d still think they’re not near their best, so there’s still a significant improvement left in this team.” 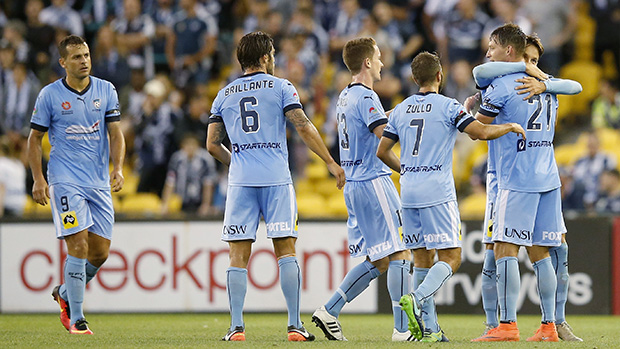 Arnold called for a large backing at Allianz Stadium on Thursday night, as he revealed he only had minor selection headaches for the clash with midfielder Brandon O’Neill suspended for yellow card accumulation.

The players and myself think we’re showing the Sydney public a lot of good things and we hope the crowd turns up tomorrow night. Where away crowds don’t travel, the home crowd can be an extra player for us and give us that support that we need.

“This team will continue to do what it’s doing, we’ll get better, we’re down to the business end of the season where you do get rewarded with your performance and I expect that we will get better as the season goes.

“Milos Dimitrijevic will come straight in [too], he’s a fantastic player, he offers something a little bit different.

“Calver is back in the squad this week as well, he’s ready to go again so we’ve got plenty of depth.

“It’s something I have to think about in the next 24 hours [whether Zullo returns]. Carney did exceptionally well last week and you saw by his experience how well he did so I’ve got a good headache there.”

It’s Mates Night Out as Sydney FC take on Wellington Phoenix on Thursday at Allianz Stadium (kick off 7:50pm AEDT). Grab two GA tickets for $50, enjoy a free sausage roll if the Sky Blues score two goals in 70 minutes and be there to back your undefeated league leaders.