Sydney FC Head Coach Graham Arnold believes the Hyundai A-League split round will pay dividends for his squad as they prepare to face Perth at nib Stadium on Sunday (kick off 7pm AEDT).

Come kick off, it will have been 16 days since the Sky Blues last played competitively, however Arnold believes his squad are in perfect shape thanks to last week’s training schedule, and is expecting another solid performance away from home.

“It [the split round] has been great,” Arnold said.

“We’ve been able to work a lot on things, the one percenters we needed to work on, and for the boys last week was a very good training week physically.

“It was a great mental freshener so it’s been a great period to have off and has given us a great opportunity to tidy up things we weren’t happy with and I expect that Sunday will be very good.

“When you look at how we trained last week, and we had an in house game last Friday, a 70 minute game with no outs, the boys clocked up their kilometres in the training game that they’d normally clock up in a game.

“For us it was about improving and being ready for this week against Perth and we are.” 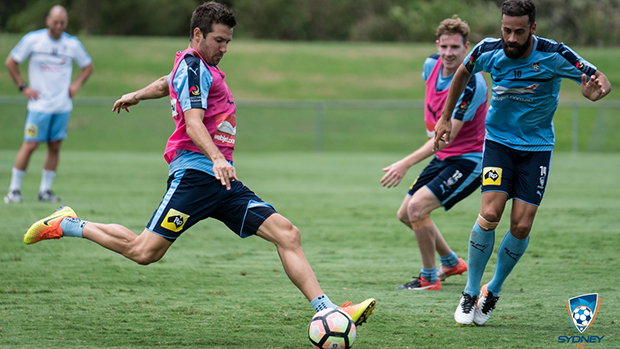 However, for Arnold, the focus is solely on three points as he shifted trophy celebrations from his mind, while confirming there’d be minimal changes to the squad despite the absences of Rhyan Grant and Danny Vukovic.

“We’re not thinking about it [the Premiers Plate] at all,” Arnold said.

“Until we get the three points on Sunday and perform to the best of our ability there’s no trophies being handed out yet. At the end of the day I don’t want to think about those things until we actually achieve it.

“For me today is Thursday, it’s about preparation for the Perth game. We enjoy the trip to Perth, we’ve had a lot of good success over there in the past and we expect to do that again on Sunday.

“We’re focussing on three points on Sunday. It’s nothing about getting ahead of ourselves. We know we’ve got six weeks to go, six weeks that we are pushing to win all six games.

“I still believe we’ve got improvement left in us, a lot of improvement. There’s a huge amount of belief in the squad, the players believe enormously in each other which is crucial and I expect our form to pick up over the next six weeks to finish off.

“It’s about putting your strongest team out available,” he continued.

“We’ve got a lot of depth in the squad. I have 100% complete faith in anyone I put out on the field.

“Obviously Andrew Redmayne will come in for Danny Vukovic. He’s trained exceptionally well and he’s back working with John Crawley who basically developed his career for him.

“I’ve got 100% faith in whoever takes the pitch, and I expect all the players that take to the pitch to perform at 100% of their ability.”

Sydney FC travel to take on Perth at nib Stadium on Sunday (kick off 7pm AEDT). Catch the match live on Fox Sports or follow @SydneyFC on Twitter for updates.