Sydney FC Head Coach Graham Arnold said he’s expecting the performance of the season from his squad as they face Melbourne City at ANZ Stadium on Friday night (kick off 7:50pm).

Sitting six points clear at the top of the table, the Sky Blues take on the second placed Victorian side in a top of the table encounter, and Arnold said he has a number of selection headaches to make following Sunday’s comfortable victory over the Jets with a rotated squad.

“The A-League is tough because everyone gives you different challenges every week and this game is no different,” Arnold said.

“The aim is to win every game, the morale within the group is very high, the belief is very high and the trust within each other is just as high.

“Friday night is another game. We don’t have to travel they do, they’ve not played on this stadium we have, and we feel that we’re definitely going to win the game.

“The boys are really fresh, the atmosphere in the dressing room is great,” he continued.

“I’ve got some good [selection] headaches and decisions to make. I was so proud of the boys that came in last week that hadn’t played for quite a while, Dimitrijevic, Seb Ryall and young George Blackwood. It gives me a lot of good headaches.” 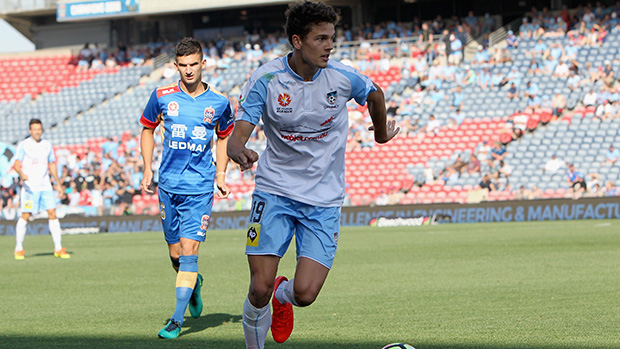 “It’s a totally different competition, the FFA Cup Final was something that’s in the past,” he said.

“We’re playing at home in a wonderful stadium, we’ve got a great record here, the last time we played here we beat the Wanderers 4-0 and we play each game on it’s merit. We’re just looking forward to Friday night.

“I learnt more about ourselves [from the Final],” he continued.

“We controlled a lot of the game. It was a game of inches, they beat our keeper once and hit the back of the net, we beat their keeper once and it was cleared off the line so all we can do is be positive, look forward.

“We have a squad with a lot of quality and the boys are looking forward to playing in front of a big crowd.”

Sydney FC take on Melbourne City in a Hyundai A-League top of the table clash at ANZ Stadium on Friday night (kick off 7:50pm). Get your tickets today and be there to back your Sky Blues or follow @SydneyFC on Twitter for updates.