Sydney FC Head Coach Graham Arnold has confirmed Bernie Ibini is close to returning, with an appearance in round one a definite possibility according to the Sky Blues’ boss.

The Sky Blues winger, recovering from a broken leg sustained in Belgium, won’t be risked against Blacktown City in the Westfield FFA Cup on Wednesday, but is slated for minutes against Adelaide United in a behind closed doors friendly next week.

Arnold also believes Ibini will slot in well to the Sky Blues’ new system, despite the wingers’ absence of over one year.

“Bernie has been doing all the training with us,” Arnold said.

“We’re not going to risk him on the surface on Wednesday night, but he’s ahead of schedule and he’s looking good for round one.

“Next week we’ve got a game against Adelaide before the competition starts and he’ll get minutes in that.

“We’ve changed our style this year. We’re playing a much higher pressing game and much more physical game in intensity, and Bernie will adapt to that very quickly.

“Conditioning wise he’s good, he’s always kept himself in good shape with a lot of training and running so physically he feels very well.”

Ibini will join George Blackwood and George Timotheou as the only absentees for Wednesday night’s Westfield FFA Cup Quarter Final against Blacktown City, with Arnold also confirming Bobô is in line to make his first competitive start.

Arnold said he’s pleased with the fixture being moved to Sydney United Sports Centre, Edensor Park, and believes the surface quality will bode well for the Sky Blues.

“Everyone is fit, we’ve got two young boys missing in George Blackwood and George Timotheou, they’re away with the U20’s, but apart from Bernie everyone is ready to go.

“We’re looking forward to a good surface at Edensor. We’re going to a field that we played on two years ago, we won 3-1, and a lot of the players are familiar with it.

“It’s a really good surface. The surfaces that we’ve had to play on in the first couple of rounds of the FFA Cup, and friendly games, on normal grass have been quite bad, so a flat, good consistent surface is perfect for us. 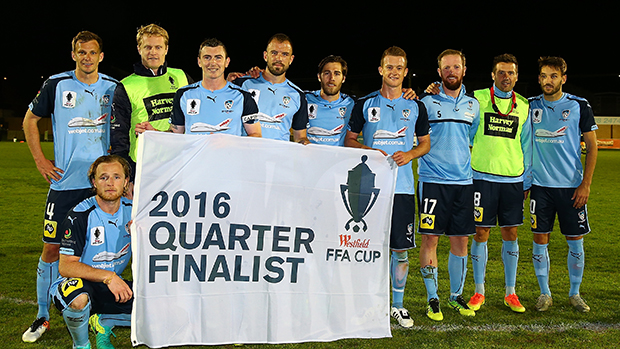 “He’s been extremely passionate about the sport for a long time. I remember back in the days when he was the kit man at Marconi when Frank Farina was there in the old NSL. He’s come through the ranks and done a great job getting to the quarter finals.

“It’s their last game of the season, they’re going to throw everything at us and we’ll be well and truly ready.

“If our mentality is right, our attitude is right, we go out to Sydney United’s ground at Edensor Park with a lot of confidence.”