Arnold Confident Of Another Three Points

While not every win will be pretty, Sydney FC Head Coach Graham Arnold is confident of winning each week as his squad prepare to face the Newcastle Jets on Saturday (kick off 5:35pm).

Arnold said he took a lot out of the Sky Blues late showing against the Phoenix on Sunday, and believes that when the going gets tough is when the best comes out of the squad at his disposal.

“Away games are always quite tough but we’ve got a huge belief within the squad,” Arnold said.

“There’s a lot of trust within the players and on the defensive side of things the players know that everyone’s got their back.

“[The win against Wellington] gives me a lot of faith and trust,” he continued.

“We didn’t keep the ball well in the first half but we defended extremely well and sometimes you need to grind out periods of the game to stay in the game and we did that.

“I felt the second half we were the better side, and the last 20 minutes especially when our fitness ticked over we ran over the top of them.”

The Sky Blues boast no injuries and a settled squad currently, and Arnold confirmed there’d be minimal changes for Saturday’s clash while also hinting that Alex Brosque’s role as an impact player off the bench wouldn’t last much longer. 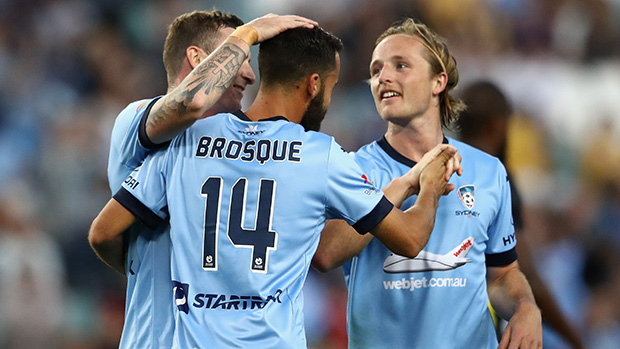 “Brosquey had 90 minutes for the first time in Canberra last week and at the moment I’ve got plenty of choices to make,” Arnold said.

“I’m seeing after 60 minutes when I bring Alex or Matt Simon on, the opposition struggle to contain them.

“Out of the nine goals we’ve scored so far in the league five of them have come in the last 20 minutes when our fitness kicks in and we bring the impact players on. It’s about having a strong squad, using all the players and so far it’s working well.

“Alex is too good [to be an impact player] but at the moment we’re building his fitness and making sure that there’s no slip-ups with what happened to his hamstring.

“Bernie is training the house down. He’s in consideration for Saturday mainly because of his impact off the bench and what he can give us,” Arnold continued.

“[Alex] Wilkinson will also train today. He got that ankle injury against the Mariners and Wilko is such a tough character, he fought through the pain in the game against Wellington and he did a fantastic job. We gave him an extra day to recover and he’ll train today.”

Sydney FC face the Newcastle Jets at McDonald Jones Stadium on Saturday 29 October (kick off 5:35pm). Catch the match live on Fox Sports or follow @SydneyFC on Twitter for updates.