Arnold Challenges Squad To Be Best Ever

Sydney FC Head Coach Graham Arnold believes his Sky Blues squad can be the best in Hyundai A-League history, following their undefeated start to the 2016/17 season.

It’s a start that has smashed national league records dating back to the 80’s and Arnold has set his squad the challenge of being the best ever, ahead of their next A-League encounter at home at Allianz Stadium on Friday night.

“I think we can be the best team the A-League has seen,” Arnold said.

“The stats show that in a 10 team comp the most points tally in the A-League history for a team finishing first is 57 so our challenge has to be 58 and then we can say we’re the best team in the A-League.

“At the moment we’re on 30 points, we’re sitting in a good position, I want to be in a great position and we’ll only be great if we get 58 or plus.

“I’m most proud of the five goals against. Our attacking performances have been fantastic and for me one of the most pleasing aspects is how ruthless the boys are.

“I’ve not been here where one nil was enough. The boys want two, then they want three, then four.

“Even against Adelaide it was four nil after 68 and the boys were saying let’s go for five and that’s fantastic when the winners in the team are driving that on the field.

“I’ve been around the game long enough to know that, worldwide, the teams that win the league have the best defensive record,” he continued. 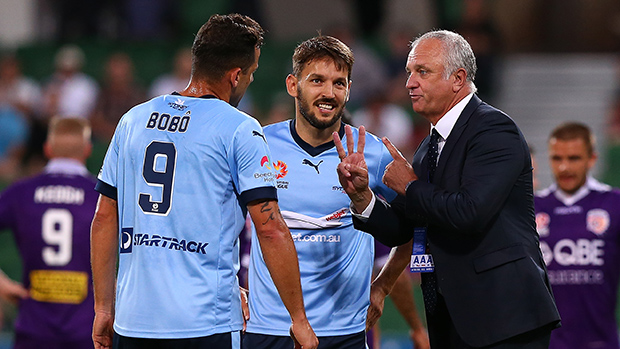 “But we’re in the same position today as the nine other teams in the A-League, we haven’t won any trophies, we’re in a good position but we’ve got a lot of work to do and we move forward.”

Arnold said he believes opposition teams are intimidated by the Sky Blues approach to matches, as he confirmed the short turnaround between the Boxing Day clash and Friday night wouldn’t be an issue for his squad.

“For us every week is a new challenge. Brisbane bring a different challenge to what Adelaide brought but it’s about ourselves and our performances and us doing everything right,” he said.

“It’s clear to me that maybe some other teams are getting intimidated by what we’re doing because they’re changing the way they’re playing.

“I’ve got six or seven players in the depth of the squad that are ready to play, we’ll train today and tomorrow, the boys all pulled up very well and they’re all fresh and ready to go.

Sydney FC take on Brisbane Roar in their final match of 2016 at Allianz Stadium on Friday 30 December (kick off 7:50pm). Get your tickets today and ensure you’re there to Roar one last time and usher in the New Year.