Sydney FC Head Coach Graham Arnold believes the Sky Blues will achieve their unbeaten dream if they maintain the form of Friday night’s 2-0 win over Adelaide United at Allianz Stadium.

The hosts shrugged off a subdued first half to score twice in two minutes just prior to the hour, sealing their 16th match without defeat in the Hyundai A-League.

It’s the kind of momentum which could end with the anointment of the Hyundai A-League’s first ever Invincibles.

“I thought that was our best performance of the season with the ball,” Arnold told Fox Sports.

“We kept the ball very well. We created a lot of chances and our pressing was outstanding as well so overall I couldn’t be happier.

“I can’t see any reason why we can’t [go unbeaten] if we continue to play like that.” 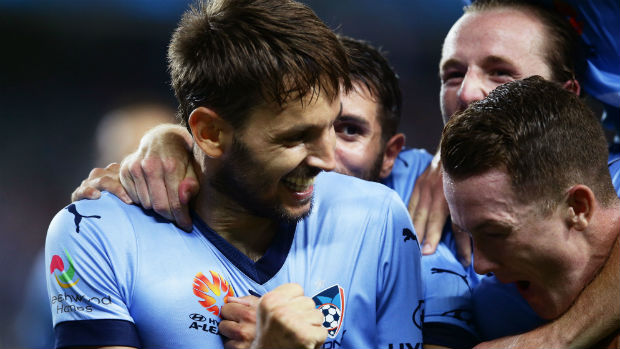 In-form midfielder Milos Ninkovic again starred for Sydney as his seventh goal of the season – a composed finish inside a congested penalty area – secured three points after Alex Brosque’s opener.

While the club has spoken to Ninkovic about staying beyond the current season, the former Dynamo Kyiv man has only one thing in mind.

“He just wants to finish the season off. He wants to concentrate solely on playing and winning the competition,” Arnold said.

“He’s a fantastic player and it’s a privilege to coach him.”