The Sky Blues are undefeated in their past eight derbies and Arnold said that trend is set to continue as he heralded the Sky Blues overall defensive displays in their most recent Hyundai A-League clashes.

Brosque Eyeing Round One Repeat

“You’d have to ask the Wanderers about the mental barrier that they can’t beat us,” Arnold said.

“At the end of the day it’s been three years and we’re making sure it continues on Saturday.

“The derby is fantastic for the fans, it gives the fans bragging rights and we play for our fans. For me it’s about getting the game plan right, the players executing it and our performance being better than it was the weeks before and we expect that’ll happen on Saturday night.

“Our defence starts from the front, we’ve got a brick wall, we’ve conceded seven goals in 14 games,” he continued.

“We’ve had many games this year where Danny Vukovic hasn’t had to make a save and the same will happen on Saturday night.” 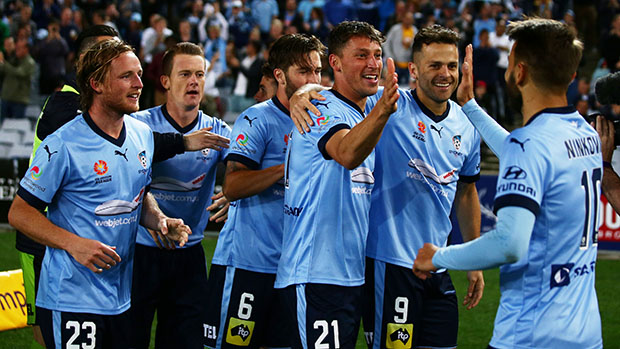 Arnold said the Sky Blues were in good health ahead of Saturday’s clash as he confirmed he was considering a number of options at centre back in the absence of the injured Sebastian Ryall and the departed Matthew Jurman.

“I’ve still got 48 hours to think about who’ll play centre back,” Arnold said.

“We’ve got some fantastic young kids in Patrick Flottmann and George Timotheou who are international players and they’ve been waiting for their chance for a long time.

“They’ve worked extremely hard at training, they were a part of the youth team that won six trophies last year, so they’re possibilities. We’ve got plenty of options and I’m happy with the options.

“For the players that we have we’ll be at full strength,” he continued.

“Alex Brosque our captain is back, he’s such a wonderful leader and player. He brings another 10 or 15 percent out in all of our players.

“It’s all about winning on Saturday and we’re sure about that.”

Sydney FC take on Western Sydney Wanderers in their one home #SydneyDerby for the Hyundai A-League 2016/17 season on Saturday night at Allianz Stadium (kick off 7:50pm). Catch the match live on Fox Sports or follow @SydneyFC on Twitter for updates.