Areti reminisces about 2007. “I was invited to the first Female Football Camp that took place at Sydney Academy of Sport in Narrabeen. It was a chance to meet new people. After the camp, Football United started at my school and of course I was the first one to put my hand up and participate as a player, and then later, as a coach.”

Areti’s perseverance, skill and ability to influence other girls in the program, caught the eye of Football United founder Anne Bunde-Birouste. Shortly after the program’s first anniversary at Lurnea, Football United was invited to the Football for Hope Festival in South Africa during the 2010 FIFA World Cup and Areti found herself on the plane to Johannesburg.

“Areti showed exceptional maturity in the build-up to the Football for Hope Festival” noted Anne, “from supporting the coordinating team, as well as joining in the football commitments and even taking on the role of team photographer! We could see early on that she’d be a fantastic inspiration to others.”

Areti thrived in South Africa, meeting hundreds of youth from around the world, playing the game she loved and stepping into leadership roles to support the team’s coordination on the ground. With the skills and characteristics she developed during the build up to the Festival and during her time in South Africa, Areti returned to Sydney a confident and determined young woman, ready to pursue her professional and footballing goals. She enrolled in college and signed up to the NSW State League high-flyers, Eastern UNSW Lions. 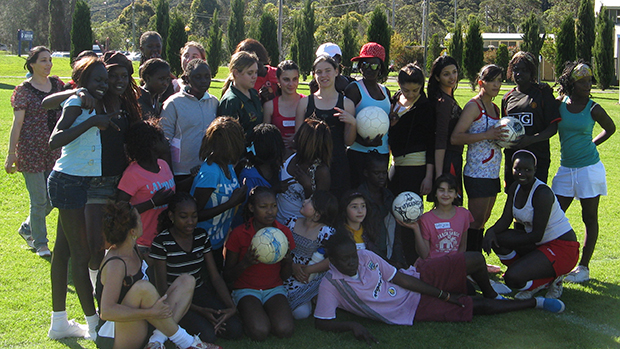 Areti also began to volunteer as a Football United coach, and delivered football sessions for hundreds of children across Sydney. After a few months she stepped into the role of Head Coach and Coordinator at the Auburn Football in the Park program, where she’d oversee a free weekly football program for 100 players each week. Areti was also influential in Football United’s burgeoning partnership with Sydney FC, coordinating young players during the Sydney FC W-League launch and managing the 120-strong flag bearers at Sydney FC A-League Harmony Day celebrations.

It was clear to Football United Program Manager and UNSW Lions teammate, Assmaah Helal, that Areti had become much more confident with her abilities. “She’d communicate effectively with players, parents and fellow coaches. It’s not an easy task to manage so many different people, and her reliability and willingness to try new things made her the perfect candidate to be our first female Head Coach at Football United.”

During this time she explored advanced coaching opportunities, eventually hanging up her boots to pursue her coaching accreditation on the FFA coaching pathway. As a young, competent female coach Areti had no shortage of offers, and spent time coaching with Bankstown City Lions before eventually stepping into the role of Women’s Premier League Reserve Grade Coach at the high-flying Macarthur Rams.

“Football United gave me a lot of opportunities to hone my coaching skills, but I’ve taken the skills I’ve learned and applied it outside of football” Areti noted, acknowledging her managerial role at Fernwood Liverpool where she trains a team of personal trainers achieve their business objectives as well as helping her own clients reach their personal health and fitness goals.

“During my time at Football United I was able to build my own confidence, to help me do whatever I set my mind to.”