Araujo Hoping To Wrap Up Title

The Sky Blues’ NYL 2015/16 Player of the Year said the title and subsequent promotion would be just reward for the effort and time spent by the players, whose campaigns started in November 2015 with the Foxtel National Youth League.

The Rob Stanton led outfit currently lead the First Grade table by one point, and the Sky Blues top the Club Championship standings by 30 points, with wins across all three grades this weekend securing the titles and promotion to NPL 1.

“We want to wrap it up this week,” Araujo said.

“If we just get the result this weekend we can play next weekend without any pressure and without the weight of it being a must win game on our shoulders.

“It would mean the world to us to win the title because we’ve worked so hard throughout the season, both NYL and NPL.

“It’s been quite a long season for us and it would be great to get the reward at the end.” 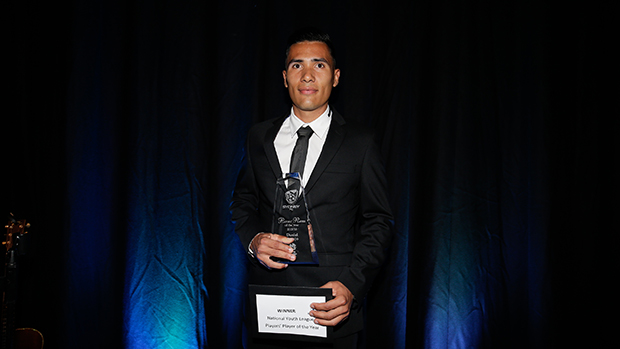 Araujo said his first NPL season with the Sky Blues has had its challenges, while stepping up into a captaincy role proved seamless for the gifted midfielder.

“It’s been a good new role [becoming captain],” he said.

“I was one of the older boys before becoming captain so it wasn’t much of a step up because we’ve always been leaders of the team.

“This NPL season has been a bit tougher than what we thought it would be,” he continued.

“A lot of the teams found a way to shut us down at times but we’ve done well to get to where we are. With hard work we should be able to get these two wins in the next two weeks.

“Marconi are a quality side, they’ve got some quality players. Last time we played them it was quite a physical battle but it should be a good game this time around.”

Sydney FC’s PlayStation 4 NPL 2 NSW Men’s side take on Marconi Stallions in their final home game of the season at Lambert Park, Leichhardt on Saturday 20 August (kick off 7:45pm). Come down to Lambert Park and cheer your Sky Blues on towards the title.