Iraqi star and birthday boy Ali Abbas says he’ll always be a Sky Blue and if he comes back to the Hyundai A-League, he won’t sign with any other club.

A smiling Abbas, who celebrated his 30th birthday on Tuesday, fronted the media on Wednesday with his national team coach ahead of Iraq’s clash with the Caltex Socceroos tonight in Perth.

It will be a special moment for Abbas, who may even captain his national team in such a vital World Cup qualifier in Perth.

But when quizzed on a potential return to the Hyundai A-League, the Pohang Steelers man was adamant.

“Of course I always come back here. And for Sydney FC as well. Exclusive. And for free!” he said with a trademark smile.

“We had a team meeting. So I couldn’t see it. But I saw the result and I was happy.”

And he’ll be hoping to make it two wins from two with his nation on Thursday night.

“If so, I’ll be so happy,” he added flashing another smile.

When the draw came out and Australia was one of Iraq’s opponents, needless to say Abbas was buzzing.

“To be honest, I was a little bit excited because we don’t want to play against each other. It is what it is [though] and very happy to be here and play for Iraq.

“It’s going to be a good time for me and Iraqi boys.”

Playing in Australia, a country where he plied his trade for eight years (first with Marconi in the NPL, then Newcastle Jets before a famous stint with Sydney FC) feels like home to Abbas.

“It does to me,” he said with a broad smile.

“But obviously born there [Iraq] and I have to play for Iraq and I can’t wait to put the jersey on.” 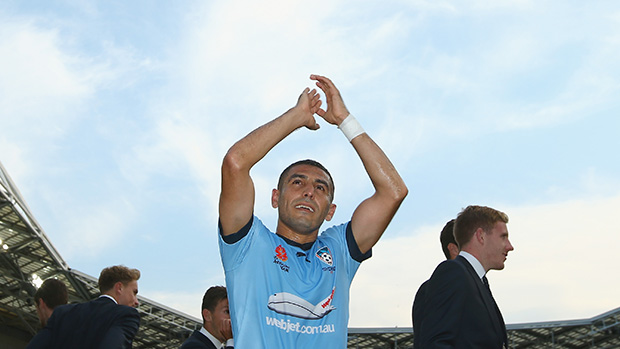 And for that he can thank his coach who has faith in him.

“As soon as they appointed Rahdi Shenaishil as coach I knew he’s gonna call me. His personality is different to anyone else, as a coach.

“I trained very hard and brought my performance and he called me.”

While former Western Sydney Wanderers in Tomi Juric and Matt Spiranovic will remind Abbas of the Sydney Derby.

“And we’ll have Alex Gersbach there too, so it’s going to be a little bit like that.”