Alex Brosque On Our Cup Win

Fresh from his return from injury, and playing a key part in guiding Sydney FC to the Westfield FFA Cup Quarter Finals, we caught up with Sky Blues captain Alex Brosque to get his thoughts on our Round of 16 win.

A win and a goal, not a bad way to cap you comeback?

Yeah, I was very happy after the game. We got the win and I made it through without any sort of issues which is a good step in my recovery. To get the goal and help the boys win definitely capped off a good night.

On your goal, was it always your intention to shoot once you received the ball?

As soon as I got the ball off my Bobô my touch took me through one on one with Rhys Williams, it was always to just run at him, try and get half a yard and then have a crack. The way Liam Reddy was playing last night I figured it was the only spot I could put it to actually beat him, he was saving everything. It took two nice goals to beat him last night but in saying that we were able to come up with them which was good.

What was the feeling when you saw the ball hit the net?

It was just relief and joy when it hit the back of the net. It was a really important game for us. We’ve signalled our intent that we want to go for all three trophies this year and even though Perth is an away trip and a great team, the win was exactly what we wanted.

What did you make of the team’s performance overall?

I thought it was great the way we played last night. Every game we’ve played this pre-season we’ve lifted in terms of everything we’re trying to put together. We controlled the entire match, restricted a squad with Adam Taggart, Chris Harold and Andy Keogh to one or two shots in normal time and not much threat. I thought we defended well but I was most pleased with what we did with the ball in attack. We created a lot of chances and if Liam Reddy wasn’t in the form he was in we could have had a couple more early on.

Could you single out any boys for special praise? 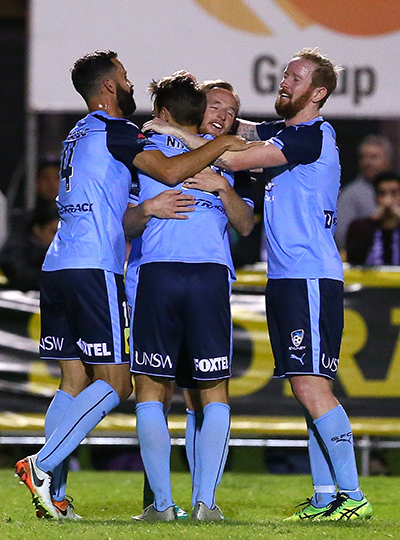 Finally, Blacktown City in the Westfield FFA Cup Quarter Finals, what do you make of that draw?

It’s a good draw, a local Sydney match for us especially after this trip to Perth. The artificial pitch in Blacktown isn’t ideal when it comes to the joints and injuries, you don’t want anything to happen in a match like this, but it is what it is. We’re excited to be playing Blacktown and I’m sure they’re just as excited. It’ll be good, there will be a good crowd. Coming up against one of the top two sides in the NSW NPL we think it’ll be a great test for us in pre-sesason.