It’s been a week since Sydney FC fans had hearts in mouths as Alex Brosque and Michael Zullo left the pitch injured in our Westfield FFA Cup Quarter Final win, so we caught up with the Sky Blues’ skipper and left back to find out how they’re feeling and how recovery is coming along for the duo.

How are you feeling and how is recovery coming along?

Alex Brosque: I’m pretty good. I’m not yet out on the field but I’m doing jogging and some cross training stuff. It’s feeling quite good, and I’ll be aiming to be back for our preseason game next week to get one more match in before the season starts.

I feel much better now. I think the first two days were quite painful and sore but the extent of the injury isn’t too bad. The swelling has come down, it’s feeling a lot freer to walk on and move on so it’s good.

Michael Zullo: It’s feeling good, it was a lot better than I first thought. I was worried at the start when it first happened but it’s settled down quickly and I’m back training with the team. 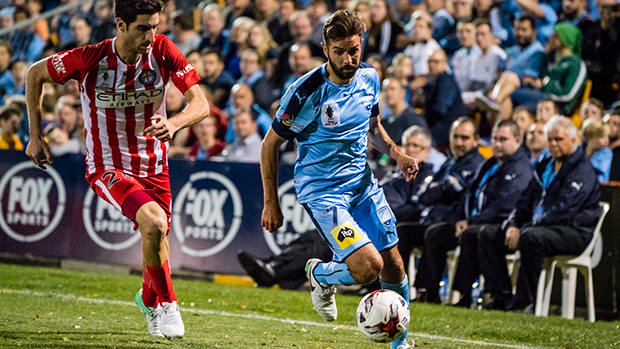 From the first few days after it happened to now, how has it been?

AB: The first couple of days after was just icing and resting and the physio working in the inflammation to get it away, they did a good job.

MZ: At the start it was sore but the medical team has been giving me some good treatment. It’s reacted really well, it’s not a big deal just a minor one.

All good for Round One?

AB: No way will I miss round one, I’ll be right for that.

MZ: It’s up to the physio when I’ll be ready but 100% no problems for round one.