Alex Brosque On His 150th Cap

In line to make his 150th Hyundai A-League appearance for Sydney FC, we caught up with captain Alex Brosque to look back at his time with the Sky Blues.

150 Hyundai A-League appearances for Sydney FC, quite the accolade, how does that make you feel?

Honoured. To play that many games for your home club is special, it’s quite rare to be able to do that. I’ve always expressed what it means for me to be able to play in my home city, for my home football club, and to be able to play that many games and hopefully a lot more is something a lot of players wish they could do and I’m lucky enough, and I definitely consider myself lucky enough, to do it. Particularly after last year’s injury, to come back now, I’m feeling good and definitely enjoying every game more and more. The more games I can play for this club the happier I’ll be when I finish. To know this milestone is coming up is very special.

What’s been your standout season?

Probably the obvious one, the one where we won the double in 2009/10. That was a special year with a special group of players. It’s always great to know that at the end of the season, once everything is done and all the hard work you’ve put into it is paid off in the form of silverware. That was probably the highlight, but there’s been so many and I’ve enjoyed all of it, the ups and downs and all the people, players and staff that have been here. The club is a second home to me, everyone is family here and we’ve got a great feeling here that we can do again what we did in 2010. 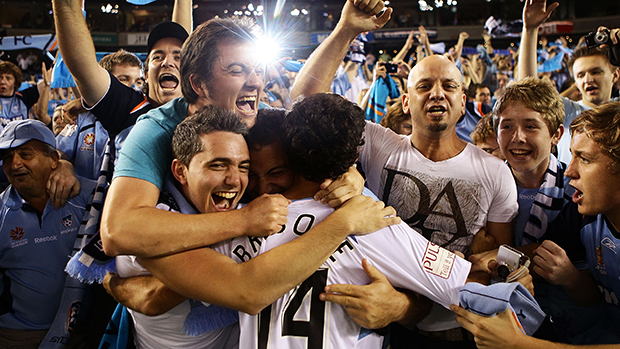 Three time player of the year, is there a season that sticks out for you as the one where you played your best football?

Again I’d say the 2009/10 season. We had guys across the frontline like Steve Corica, Aloisi, Bridgey, I had a really good understanding on the field with those guys, in particular Mark Bridge. That was probably the year I look back on as one of my best. Throughout the years I’ve had moments in each where I thought I’ve been playing some good football. It’s always easy to look back on times that you win and say that’s up there with the best.

You’ve played with plenty of players at the club, which are your favourites?

Juninho would definitely be up there, just in terms of his quality and his vision. As a striker with someone like him behind you, you literally just had to make a run and he’d find you and that was great. He’s a world class player and to have someone like him giving passes to you every week was great. In saying that, a lot of the local team mates as well have been great. Players like Corica, Terry McFlynn, I enjoyed playing with them. Corica was great in every way, as a guy, as a captain, as a footballer he was great in every way. To be honest, with the current boys it’s just a great squad. I look around the whole squad and I’ve got confidence in every single position and not just that, the boys are coming off the bench and doing such a great job. I don’t think anyone else has the quality that we do all over the park, and I think this year rather than individual standouts it’s probably the best team we’ve ever had for me. 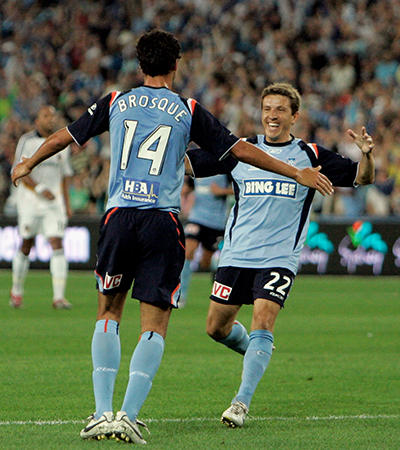 There’s a lot of stability now, ever since Arnie took over, I knew then that the right things were put in place. Sydney is the biggest club, it’s the club that has to be at the top, and there’s always pressure for success. With Arnie in now, he’s someone who can get instant success, as well as have an eye to the future and build a club and legacy that can last for years. I feel the Sydney FC of now, compared to when I left many years ago, is definitely in a better place.

My first goal in a Sydney Derby. Every time I see photos of that or it gets brought up it brings a smile to my face. It was the winner, not long to go in the match, first derby, it was sold out at home, it was incredible. 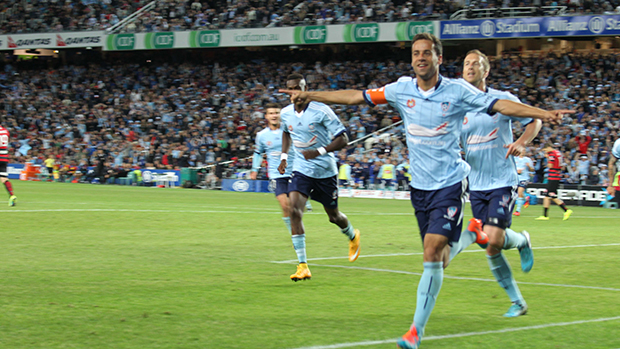 Alex Brosque will be presented with a commemorative frame on Sunday evening ahead of the Hyundai A-League kick off at Allianz Stadium.