A debut goal for new Sky Blues star Adrian Mierzejewski was the highlight as Sydney FC cruised to a 3-0 win over the Bankstown Berries at the Sydney United Sports Centre.

A debut goal for new Sky Blues star Adrian Mierzejewski was the highlight as Sydney FC cruised to a 3-0 win over the Bankstown Berries at the Sydney United Sports Centre.

Graham Arnold’s men took the lead early in the first half thanks to an own goal following good work between David Carney and Milos Ninkovic.

The Berries had some chances but Bobô put the result beyond doubt on the hour mark with a well taken goal, before the Polish international struck from the spot.

Sydney FC will now take on Melbourne City at home in the last eight of the FFA Cup following the draw which took place at full time, with venue and date to be confirmed. 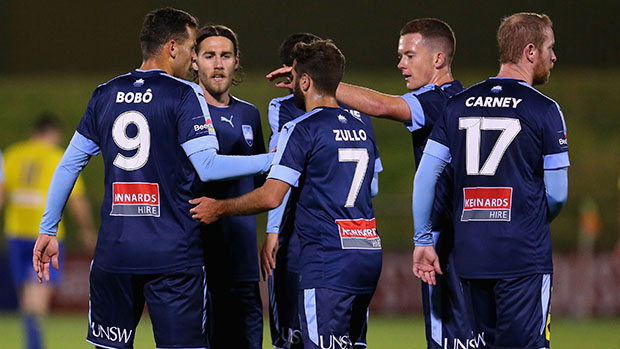 Graham Arnold on the performance: “I thought Wilkshire fit in perfectly tonight, he was great.  Adrian has only been here for seven or eight days but I thought he was outstanding when he came on and I’m sure he’ll entertain all the fans this year.”

On the next round draw: “We’re not even thinking about revenge, it’s a great draw because we’re at home and we haven’t been at home in 16 games in the FFA Cup. We’ve been going now for eight weeks, we’re looking for harder games now to finish off before the competition starts and the focus of the boys will increase.”

5’ OWN GOAL TRIPODI – Reverse pass from Ninkovic finds Carney who hits it hard and low across the Berries six-yard area and as Brosque challenges for the ball with defender Tripodi, it somehow finds its way into the net.

61’ BOBÔ GOAL – A superb reverse pass from David Carney finds Bobô in the right channel and the Brazilian hits a low shot across the keeper to extend the Sky Blues lead.

90’ MIERZEJEWSKI PENALTY – A Wilkshire cross is handled in the box by a Berries defender and debutant Mierzejewski steps up to covert straight down the middle. 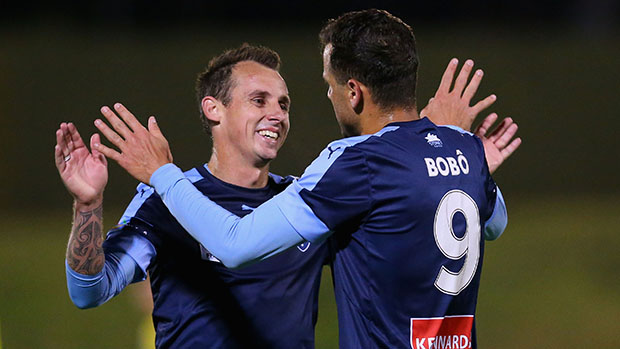 8’ OFF THE LINE – Brillante plays in Brosque who takes a touch to put him beyond the last defender, he lifts it over the on-rushing keeper but Combes gets back to make a last ditch clearance off the line via the crossbar and the Berries clear the danger.

24’ BOBÔ CHANCE – Zullo fires a long range effort towards goal which has Bobô stretching but the Brazilian’s boot can’t quite direct it on goal.

27’ VAIS CHANCE – Moustakas does well to beat a number of Sydney FC defenders and fire the ball across to the near post but Vais can only flick the ball wide.

29’ MOUSTAKAS CHANCE – A free kick on the edge of the box is blocked and when Farmer puts the ball back in Moustakas is in acres of space but hit his first time volley over the bar.

34’ BRADSHAW CHANCE – A long ball forward isn’t called offside and sets Bradshaw free but he blazes over the bar when he should have done better.

51’ ZULLO CHANCE – Carney finds Zullo on the left who gets behind the defence and hits a left foot shot inches wide on the angle.

53’ REDMAYNE SAVE – A bouncing ball on the artificial surface is latched upon by Moustakas but Redmayne is out quickly to block and clear the danger.

64’ REDMAYNE SAVE – A ball over the top plays Vais clean through on goal but his low shot is saved by the outstretched foot of Redmayne.

85’ BROSQUE CHANCE – A ball over the top falls to Brosque who hits it on the volley only for the keeper Taylor to brilliantly tip over.

86’ CARNEY HEADER – From the resulting corner a cross finds Simon at the back post, he heads it across goal to Carney but his low close range header is saved at point blank range by Taylor. 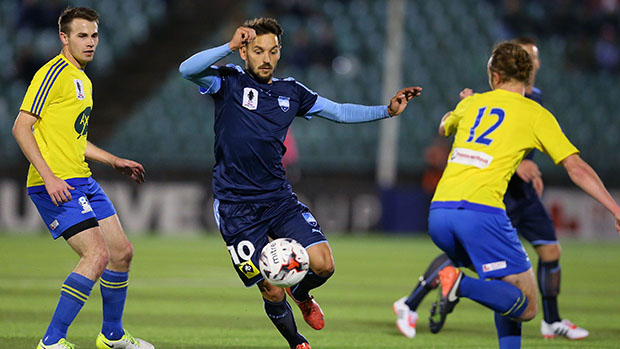 Head Coach Graham Arnold gave a competitive Sydney FC debut to Luke Wilkshire at right back in a strong starting line-up resembling the side which defeated Darwin Rovers 8-0 in the round of 32.  The only changes were Paulo Retre, who dropped to the bench in place of Wilkshire, Patrick Flottmann who made way for Seb Ryall, Brandon O’Neill in for Chris Zuvela and Alex Brosque for Matt Simon.  Meanwhile new Polish international signing Adrian Mierzejewski came onto the bench for his first showing in a competitive match for the Sky Blues alongside new keeper Alex Cisak for the first time.