With the Hyundai A-League Premiership and Championship trophies in tow, Brosque and Cisak spent the evening passing on their footballing knowledge to the next generation of Sky Blues while also observing the teams’ final training sessions.

New Sky Blue shotstopper Alex Cisak, who’s seen plenty of Academies during his time playing in the UK, praised the Sky Blues set up and said it was promising for the next generation of Sky Blues.

“There was no A-League at the time when I moved to the UK,” Cisak said.

“They [Sydney FC’s Academy] have got brilliant facilities where they’re training at, I didn’t have that opportunity, so it can only be good for Australian football and Sydney FC. The players are very fortunate to be where they are.

“It was brilliant to see all the Academy boys working hard and to hear that some of the teams had won their league was brilliant for the club.

“All the coaches have done well there to work hard all season. It’s good for Sydney FC to have their Academy teams winning and it upholds the tradition at the club of wanting to win every single trophy available.” 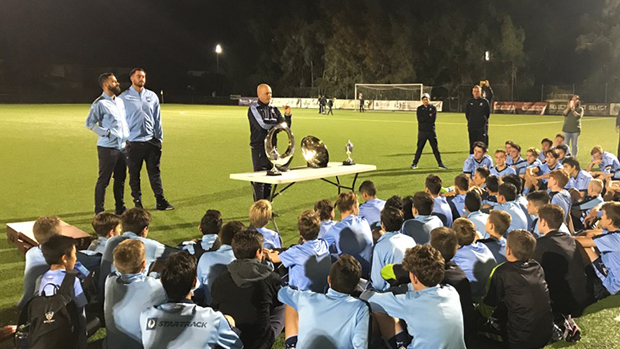 On speaking to the Academy players, the Hobart born goalkeeper said he was hopeful of having provided the boys with enough knowledge to help them on their ambition to one day play for the Sky Blues in the Hyundai A-League.

“The boys asked us about our experiences in football,” Cisak said.

“We just tried to pass on as much knowledge and give them as much information as we could about our careers and the right messages so they can learn from what we said, take it to their own game and one day play for Sydney FC.”

Sydney FC’s Academy teams will now break for their offseason before returning to training and preparing for the 2018 season in the New Year.