It’s been 284 days since Ali Abbas was helped off the field following a serious knee injury in the second Sydney Derby of the Hyundai A-League 2014/15 season. The road to recovery has been long and hard and with Abbas re-joining Sky Blues training sessions this August, we sat down with our Iraqi midfielder to discuss his injury, recovery and where he’s at now.

What were your feelings immediately after the injury was diagnosed?

I felt really sad and upset and I almost cried my eyes out. Elias and Doctor Amir were next to me and I told them please don’t tell me my knee is injured because I had Asian Cup commitments coming up and I was so sad. They told me I had done my ACL and MCL and that made me very upset

How tough were the first few months of recovery?

The first few months were really tough. As a soccer player, especially me, you train three times a day and all of a sudden you lose that, you can’t even walk. I think you can become a little bit crazy but I just had to manage everything around and push myself and believe I would be back as soon as I could just to walk normal and train normally. It was very tough the first three or four months.

With fellow injured teammates alongside you, how much did you push each other during recovery?

To be honest all the team, especially the coaches, Clarky, Elias, Stan, all the people around me helped me so much to push me and help me forget. I think we lost around three players and we just managed to speak to Rhyan [Grant] because he had the same kind of injury and he was always there to give us advice and tell us what to do and that helped me a lot. You have your teammates around you and that helps you to push yourself to become healthy again.

And the support from your girlfriend, how important was that?

You have printouts and images from when you suffered the injury and subsequent messages you received on social media in your locker. How did having these on hand help during recovery?

The printouts helped me a lot. I keep them there to help remind me about what I’ve been going through since the injury. I just want to prove to myself and the people that support me, I want to make them happy and make them proud, especially our Sydney FC fans because they’ve been there for me since day one and I don’t want to disappoint them. I have these pictures in my locker just to keep me on my toes to train hard and to give everything I have to come back and be much stronger than before. Every time I enter the dressing room and I see the pictures it makes me feel like going back to the gym to do extra training which will help me. 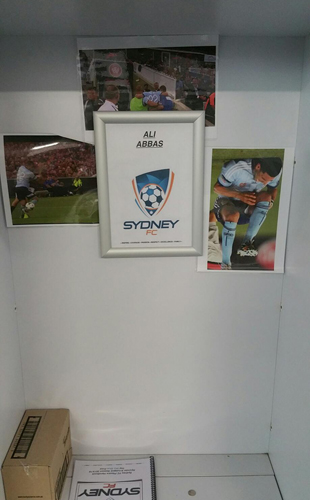 How are you feeling now?

What can and can’t you do at the moment?

I’ve been able to do almost everything. It’s still non-contact at the moment but I can do a lot of stuff like kicking the ball, passing and shooting but not crossing yet. Moving around is much better than before and I feel so happy about that. Hopefully I will do contact soon, it will be a bit of a challenge for me because when you come back from an injury like that you are scared but I’m trying to forget that and just let it go and not be scared of anything, just keep playing and challenging for every ball. I’m working on my right foot which is getting better because I haven’t had a right foot before, so I’m trying to use both feet hopefully this year.

To be back and taking part in training with the team, how does that make you feel?

I missed joining in so much and it feels so much better to be back. After almost nine months doing nothing with the team and all of a sudden I’m now training with them again, it’s really fun. I think we have a really really good squad and good boys as well with their attitude and character, they’re unbelievable.

When will you be back?

I can’t put any time on coming back yet but I’m just working hard every day and hopefully I’ll be back as soon as I get the clearance from the fitness coach and the physio and the doctor.

Sydney FC A-League Memberships are now on sale for the Hyundai A-League 2015/16 season.   Click HERE to become part of the Sky Blues family