Premiership and Championship winning U18’s Head Coach Jimmy van Weeren said Sunday’s Grand Final triumph was a just reward for his players’ development over the course of the season.

The Sky Blues took out the title after extra time, 3-2, against Sydney United at Leichhardt Oval and van Weeren said the result was as pleasing as his teams’ progression has been throughout the year.

“It was a nice reward for the players’ effort over the course of the season [to win the title on Sunday],” he said.

“Given the status of Australian finals it’s nice to be recognised and win both the league and Grand Final.

“It’s nice to take out the double, given this age group it is about performance and results as well as development.

“It was a nice reward for everyone involved to see not only the individual player development throughout the year but also to see the team progress and move forward. 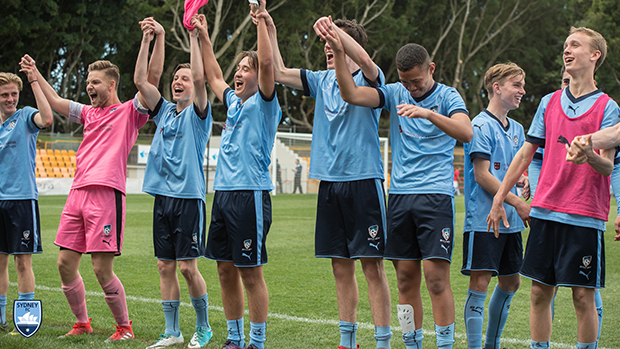 “It’s been phenomenal [seeing the players develop over the season],” he continued.

“We had one of the boys, a 2001 born player, make his first grade debut against Wollongong Wolves and we’ve had four or five boys start or play multiple times for the U20’s throughout the season.

“It’s rewarding to see young players in an U18’s team step up and contribute to the U20’s squad with Head Coach Rob Stanton and the players there too.”

van Weeren said he wasn’t sure what to expect in Sunday’s decider, despite two victories over United in the regular season, but with the result in the bag he’s set his sights on the future and continuing to produce the next Hyundai A-League Sky Blue stars.

“I wasn’t sure how the game was going to go,” he said.

“They’re quite and organised team and very physical without the ball and the first time we played them it was close, a 1-0 win, the second time we beat them 4-1 quite comfortably so we weren’t sure what to expect on the weekend. It was nice to get past them in extra time.

“[On the future now] I’m looking forward to trying to produce more players for our NYL team and hopefully future first graders one day,” he added.