10 YEARS ON: Football The Winner In Round 1

Although honours were shared in a 1-1 draw at Aussie Stadium, both Sydney FC and Melbourne Victory would have taken plenty from their inaugural match in the Hyundai A-League.

In a match befitting the beginning of a new sporting rivalry between Australia’s two biggest cities, more than 25,000 fans enjoyed a pulsating contest punctuated by goals to two of the league’s marquee players.

As if playing to a script, the Victory threatened to spoil the home side’s party time and again, only for star striker Dwight Yorke to give Sydney FC the lead with a superb finish late in the first half.

In the 44th minute, somewhat against the run of play at the time, Andy Packer drove in a low cross from the right and Yorke dived forward and angled a header across Victory keeper Eugene Galekovic.

Then, after a frustrating hour or so during which he conjured numerous scoring chances, Archie Thompson celebrated the birth of his son with a well-deserved equaliser on 72 minutes.

Carl Recchia fired in a sizzling cross from the right and Thompson rose at pace on his way to the near post to finally beat Clint Bolton and find the back of the net.

The locals appeared to tire in the closing stages and Melbourne clearly had the better of the genuine scoring opportunities – most falling to the elusive Qantas Socceroo striker – but if ever a draw did not disappoint, this one has whet the appetite of players and fans alike for the season ahead.

Although Sydney FC started full of fire, it was the visitors who settled more quickly with Thompson causing real headaches for the defence.

He had a golden opportunity on eight minutes but Bolton was equal to the challenge, saving with his legs, only for the rebound to fall to Andy Vlahos who blasted wide with an open goal beckoning.

Three minutes later Thompson was again unmarked on the left of the area and he laid it off to Daniel Allsopp who should have hit the target with Bolton little chance had he done so.

Within minutes, though, Sydney FC was back in charge, David Zdrilic forcing a good save low to his left by Galekovic with a nice shot on the turn.

Sasho Petrovski and Ulsterman Terry McFlynn also started to make their presence felt, but Kevin Muscat and Geoffrey Claeys were more than solid in defence for Melbourne. 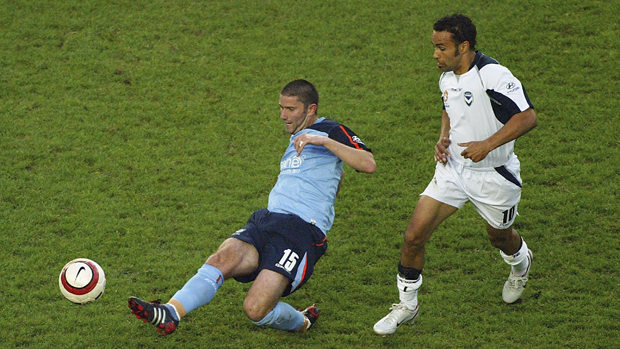 Thompson had two more narrow misses in the first half, firstly when Kristian Sarkies lifted a great ball in that the speedy striker helped on to the crossbar and 10 minutes later sliding in fast and forcing a strong reaction save from Bolton.

Right on half-time, Vlahos hustled the ball into the net only for the offside flag to be raised – one of five times Victory players were caught marginally offside by the generally alert Sydney defence.

The first 20 minutes of the second half was also played at a frenetic pace, with both sides creating half-chances with high-quality attacking play, and both goalkeepers being kept on their toes.

Yorke and Petrovski provided good focal points for the home side, while Vlahos, Sarkies and Michael Ferrante showed that they will give Thompson many scoring chances as the season progresses.

Sydney FC Memberships are now on sale for the Hyundai A-League season 2015/16.   Click HERE to become part of the Sky Blues family