Sydney FC have moved ten points clear at the top of the Hyundai A-League after a 2-0 defeat of third placed Brisbane Roar at Allianz Stadium.

Sydney FC have moved ten points clear at the top of the Hyundai A-League after a 2-0 defeat of third placed Brisbane Roar at Allianz Stadium.

The Sky Blues are unbeaten in 13 games this season ahead of their trip to the Central Coast Mariners next weekend which marks the halfway point in the season.

Goals from Alex Brosque and Milos Ninkovic saw off the Roar on a night when Sydney FC could have had many more goals.

Brosque was sent off midway through the second half following a second yellow card however the Sky Blue held tight to record their tenth win of the campaign. 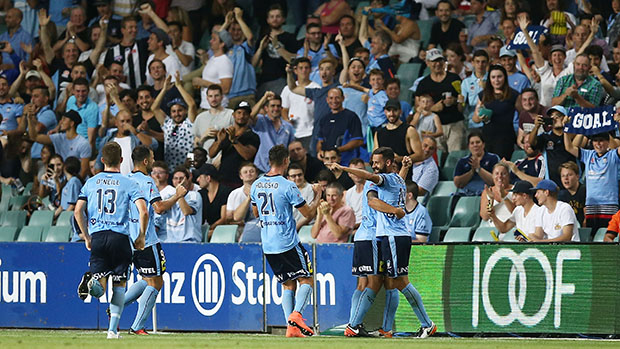 Graham Arnold: “It was a fantastic effort. The character from the boys and the performance was outstanding. There’s still so much improvement left in us that I believe we can be a great team, not a good team.

“To win games when you roll your sleeves up and have to fight is quality. It might not be a football purists result when we went down to 10 men but I coach my teams to defend when we go down to 10 men.

“We did it against City where we had 10 for the last 15 minutes and outplayed them and the same tonight. I’ve got this feeling that we’re going to be much better and we can do much better.”

36’ BROSQUE GOAL – Holosko feeds Bobô and the Brazilian drives into the Brisbane half for thirty yards before releasing Brosque to finish into the corner beyond Theo.

63’ NINKOVIC GOAL – Grant plays the ball to Ninkovic who is tackled but the ball falls to Bobô who plays it back to Ninkovic to bear down on goal and finish into the corner. 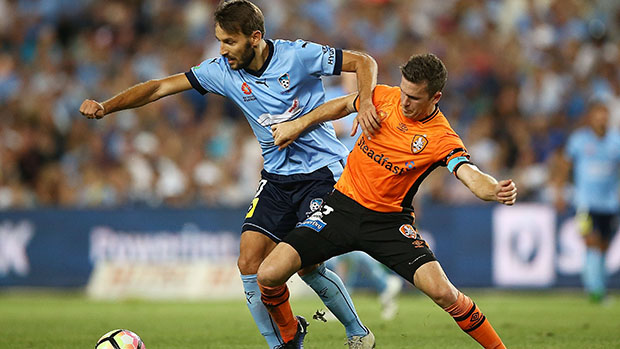 16’ WILKINSON BLOCK – Broich plays the ball over the back to MacLaren to get into a shooting position but a fantastic last ditch tackle from Wilkinson denies the striker.

17’ BOBÔ CHANCE – The ball finds Bobô on the left hand side of the box.  He jinks inside a tries to curl the ball into the far corner but it’s just wide of the post.

17’ BROSQUE GREAT CHANCE – Brisbane give the ball away from a goal kick and Holosko crosses to Brosque unmarked but he puts the shot over the bar with the goal gaping.

33’ VUKOVIC SAVE – Petratos curls the ball right footed over the wall from a free kick and Vukovic makes a flying save to his left.

39’ BROSQUE GREAT CHANCE – Fantastic team play from Grant, Holosko and Brosque to find Ninkovic who uses the run of Zullo to drive into the Brisbane box and play a ball for Brosque to hit first time which Theo makes an acrobatic save.

39’ SYDNEY FC PENALTY CLAIM – Following the Brosque chance the ball comes back into the box and appears to hit Hingert on the hand from Zullo’s nod down. Penalty not given.

41’ VUKOVIC TIPS OVER – Vukovic tips over from a Petratos shot from 20 yards.

41’ VUKOVIC SAVE – Vukovic is down quickly to save MacLaren’s header.

45’ VUKOVIC SAVE – Petratos reacts first to a cross in the box and pokes the ball towards goal but Vukovic makes a fabulous double save to deny the striker.

51’ BROSQUE CHANCE – Kristensen fails to control the ball and allows Brosque to pass to Bobô. The Brazilian gives it back to Brosque to shoot but Theo saves with his legs.

58’ ARANA OFF THE CROSSBAR – A header forward falls to Arana who loops the ball over Vukovic onto the crossbar and away.

61’ O’NEILL SHOT TIPPED OVER – O’Neill receives the ball from the corner on the edge of the six yard box and shoots but Theo tips it over.

66’ BROSQUE SENT OFF – Alex Brosque sent off for a second bookable offence.

Head Coach Graham Arnold made one change to the starting line from the team that defeated Adelaide United at Coopers Stadium four days earlier.  Milos Dimitrijevic was replaced by Brandon O’Neill in the centre of midfield with David Carney coming onto the bench.