Graham Arnold described his team’s performance as the best of the season so far after Bobô’s second half penalty cancelled out Fernando Brandan’s opener.

Sydney FC had more chances to win it with 16 shots on goal to City’s five, including a disallowed Rhyan Grant goal and a last ditch Alex Brosque effort.

The Sky Blues’ performance was even more remarkable considering they were reduced to ten men with Josh Brillante receiving a second yellow card for a tackle with 20 minutes remaining. 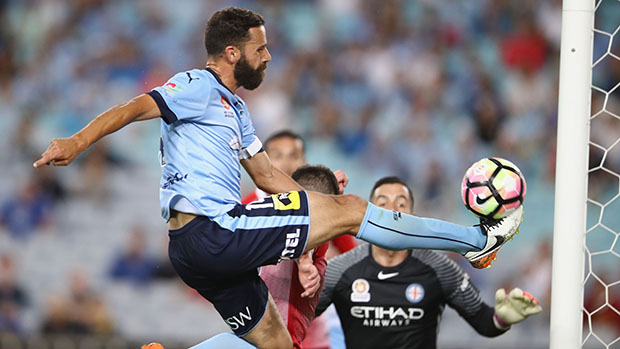 Graham Arnold: “I asked the boys about giving their performance of the year to date, and we did that. The stats showed we had 16 shots to 5, they didn’t have a shot on goal second half, we played with 10 men for 20 minutes and still dominated the game and it was an outstanding performance.

“At the moment things aren’t bouncing for us but we’ve got the quality and the strength and the belief to still play like that and get the results. We played an intense game and for a spectacle I thought it was a very good game to watch. We dominated completely the first 25 minutes where we could have had two or three goals and we were unlucky to have one cancelled out with Bobô on the line with Rhyan Grant’s goal.

“I felt it was our best performance of the season and we’ll get better. What we showed with that performance, especially domination, and what we showed in the last 20 minutes with character, that’s a championship winning performance.”

32’ BRANDAN GOAL – Colazo picks up the ball and shakes off a couple of defenders before laying the ball off to Brandan who hits it from 25 yards into the far corner of the net.

80’ BOBÔ GOAL – Jakobson tugs Bobô by the shirt as he enters the box and the referee awards a penalty.  The Brazilian steps up and fires the ball into the bottom corner right footed. 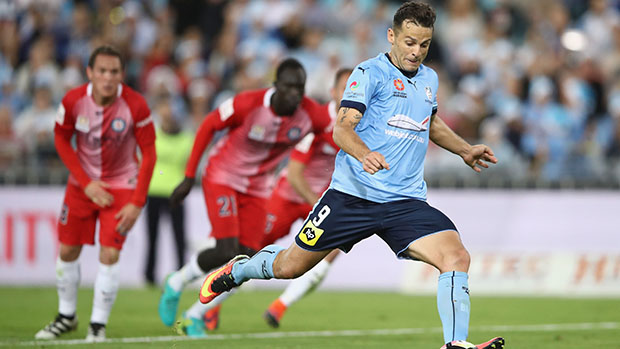 6’ HOLOSKO CHANCE –  A long ball forward is controlled by Holosko who takes the ball wide in the penalty box before shooting but a Melbourne City defender is there to block.

16’ GRANT CHANCE – Grant wins a tackle and then follows up with a challenge on Rose, with the Melbourne City defender taking an air swing and allowing the Sydney FC wide man to go clear but he hits his shot over the bar.

18’ GRANT GOAL DISALLOWED – A wonderful move involving Brosque and Ninkovic on the left allows the latter to pull the ball back to Grant.  The defender hits the shot which is going in but it hits Bobô who is standing on the line and the goal is disallowed.

26’ COLAZO HITS THE POST – A left footed Colazo free-kick curls over the wall and hits Vukovic’s left hand post before bouncing back across the goal-line behind the keeper and away to safety.

37’ DIMITRIJEVIC FREE KICK SAVED – Dimitrijevic curls a right footed shot over the wall toward the far corner but Bouzanis tips it around the post.

38’ RYALL PENALTY APPEAL – A bit of head tennis on the edge of the box eventually falls to Ryall who tries to nudge the ball beyond Jakobsen but the defender collides with the Sky Blue centre half who goes to ground.  Griffiths-Jones waves away the call for a free-kick.

59’ GRANT HEADER WIDE – A looping cross is met by Grant at the back post and his header is into the side netting despite looking like it had gone in.

60’ BOBÔ SHOT AT KEEPER – Bobô receives the ball just inside the box but fires his shot straight at Bouzanis.

73’ RED CARD BRILLANTE –  A second yellow card to Brillante after a challenge on Kilkenny results in a red card.

82’ SIMON HEADER – An O’Neill free kick to the back post falls to Matt Simon to head but Bouzanis is equal to it.

90’+ 4’ BROSQUE CHANCE – Simon flicks onto Brosque for a chance to shoot but his left footed effort is parried by Bouzanis and away to safety.

Head Coach Graham Arnold made two changes to the team which defeated Newcastle Jets five days earlier.  Filip Holosko and Bobô both returned to the side having been rested with David Carney and George Blackwood missing out this week.  Matt Simon returned to the bench.