A 10-man Sydney FC has snapped their losing streak with a courageous 2-1 victory against Bonnyrigg White Eagles on Saturday.

It was an incredible performance from the Young Sky Blues who lost Luke Ivanovic to a red card in the 6th minute.

The visitors got off to the perfect start at Bonnyrigg Sports Ground.

Some quick build up play down the left flank had Luke Ivanovic cut the ball back for Sam McIllhatton as the Sky Blues captain easily beat a hapless Chronopoulos.

An absolute brain snap from former White Eagle Luke Ivanovic had the youngster off only two minutes later after he kicked out at Bradie Smith.

Nine minutes in and Woo had another goal to add to his season tally as the White Eagles equalised.

A fine cross from Sam Gallaway set up Woo who flicked his header past Dragicevic at the near post. 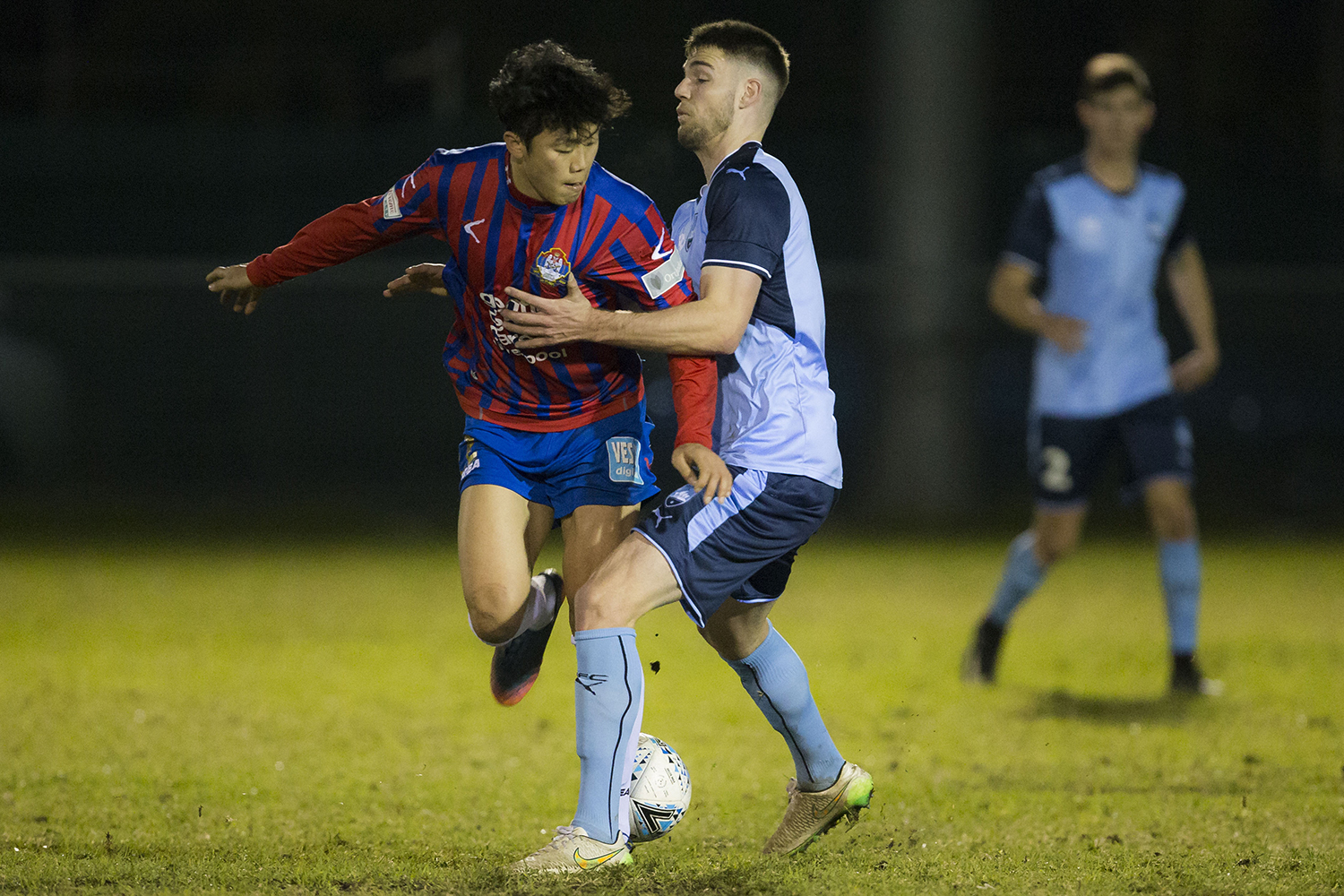 Bonnyrigg went close again on 11 minutes as James McKenzie tested Dragicevic with a header but the keeper saved well.

Brendan Curtis was next to test his luck only a minute later, this time Chronopoulos made a smart save.

Woo was proving tough to deal with in the air for the young side, rising high from a corner on 27 minutes, only to head wide of the goal.

David Vrankovic seemed up for this one and he was felled just outside the box in the 36th minute.

Tynan Diaz stepped up to the set piece but sent his effort over the bar.

Down the other end, Jeremy Cox squared up McKenzie before sending his right-footed shot over the bar.

Shervin Adeli combined well with Woo before the striker stung the palms of Dragicevic.

Again the home side threatened, this time through James O’Rourke whose header was cleared off the line before FC cleared their lines.

The home team thought they had the lead on 60 minutes but Woo was adjudged to be in an offside position after some fine skill by Adeli.

But it was the 10-men off FC that would hit the front on 63 minutes.

Jerry Skotadis moved down the left flank and hit a powerful shot toward from an acute angle and somehow squeezed the ball passed Chronopoulos.

On 70 minutes Dragicevic made a fantastic save to keep Sydney in it.

A Diaz cross found Woo at the near post and what seemed a certain goal was kept out by the young Sky Blues goal keeper. 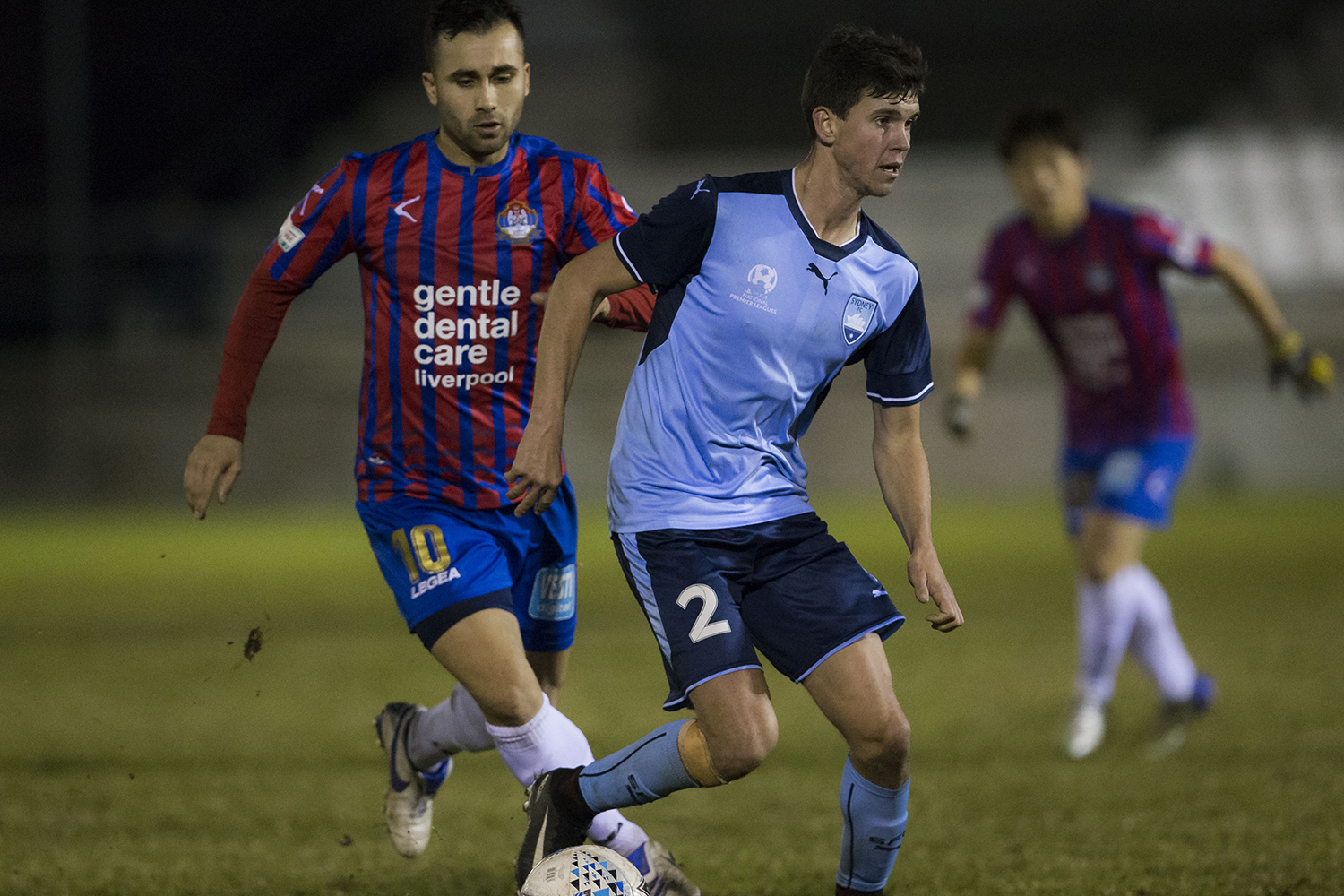 Bonnyrigg continued to push and on 74 minutes Woo got on to the end of a Diaz cross, only to head wide of the target.

Dragicevic was the FC saviour again 78 minutes in.

Another header by Woo was incredibly saved by Dragicevic before Diaz had an effort cleared off the line and eventually Mun So Gil shot wide.

Cox could’ve wrapped up the points for Sydney in the 83rd minute but Chronopoulos saved well from the striker.

Diaz went close again for the White Eagles but Dragicevic stood tall to save at the other end.

Bradie Smith crossed in a testing ball that Dragicevic punched out, only for the ball to go as far as Adeli who skied his volley from the penalty spot.

Robbie Stanton was delighted with his team praised their attitude and maturity.

“This place isn’t easy to come to and beat Bonnyrigg who is on a roll.”

“We had a plan and when we went down to 10-men, we adjusted and still created a lot of chances.

“I’m really proud of them, especially Duro in goal who just fantastic along with the boys in front of him who were compact.”

His opposite number Brian Brown was devastated with his team’s performance.

“I think we had to many boys who didn’t perform tonight and unfortunately they were some of our key players.”

“Put all that aside and how bad we played, we still had enough chances to win two games here tonight,”

Brown was full of praise for Sydney FC’s young keeper.

It’s the second time these two have drawn this season, after the thrilling 5-5 draw at Lambert Park earlier in the year. Sydney FC will look to bounce back from what they will consider a disappointing result when they return to Lambert Park for a clash with APIA Leichhardt Tigers in Round 17, while Bonnyrigg will hope to go one better as they travel to first-placed Sutherland Sharks next Saturday.