The Sydney FC Hall of Fame seeks to recognise and enshrine players, coaches, administrators, fans and volunteers who have made an outstanding contribution to Sydney FC. The Sydney FC Board considers candidates on the basis of record, ability, integrity, sportsmanship and character. The number of games played, coached or years of service is a consideration only and does not determine eligibility. Players, coaches and administrators are eligible when they 1) retire OR 2) leave the club.

3. Mark Rudan – Player:  Mark holds the honour of being Sydney FC’s first captain as he guided the Sky Blues to the inaugural Championship in 2005/06, scoring a crucial goal at home against Adelaide United to propel Sydney FC into the Grand Final. Rudan, affectionately known as “The Big Blue Man” to the Sydney FC faithful, made 61 appearances for the Sky Blues in all competition and scored six goals.

4. Clint Bolton – Player:  Renowned for his goalkeeping heroics in the 2009/10 Hyundai A-League Grand Final, saving Marvin Angulo’s penalty, Clint Bolton joined the Sky Blues as one of the club’s inaugural players and went on to appear 109 times between the posts for Sydney FC. Bolton won the Sydney FC Player of the Year award in 2005/06.

5. Pierre Littbarski – Coach:  World Cup winner Pierre Littbarski holds a special place in the annals of Sydney FC. Littbarski was responsible for bringing the first ever silverware to the Sky Blues in the 2005/06 season. In the 24 A-League games he managed for Sydney FC, he only lost five, as he also led the club in the 2005 FIFA Club World Championship. As a player he made over 70 appearances for West Germany, winning the World Cup in 1990 whilst also making over 270 appearances for FC Koln in the German Bundesliga.

7. Terry McFlynn – Player:  McFlynn currently stands as Sydney FC’s highest all-time appearance maker with 214 caps to his name. McFlynn scored seven goals from his midfield position with the Sky Blues and was awarded the captaincy at the start of the 2010/11 season. McFlynn has guided the Sky Blues through the Asian Champions League and Hyundai A-League and is a cult figure among the Sky Blues support groups. Vowing that he wouldn’t play for any other Hyundai A-League team, McFlynn retired in 2014 and currently works with Sydney FC as the Hyundai A-League General Manager Football Operations.

8. Alessandro Del Piero – Player:  Widely regarded as one of the greatest players for his generation, Del Piero joined the Sky Blues as their International Marquee at the start of the 2012/13 Hyundai A-League season. The World Cup and UEFA Champions League winner, and holder of over 500 caps for Serie A side Juventus, Del Piero made 48 appearances for Sydney FC, scoring 24 goals and was honoured with the captaincy for the 2013/14 season. Capping a remarkable two years at Sydney FC, Del Piero was selected for the Foxtel A-League All Stars, making his final appearance in Australia at ANZ Stadium against his old club Juventus.

10. Alex Brosque – Player:  There are not many more players synonymous with Sydney FC than this man – he is Mr Sydney! Captaining Sydney FC through their most successful period in history, he has set the benchmark across the club and has led both on and off the field in everything Sydney FC does. Joining in his early twenties, he has amassed 266 appearances across all competitions for the club – winning three consecutive Player of the Year awards between 2007 and 2010 and firmly cementing his status as a Legend. His trophy haul is equally impressive, earning three Hyundai A-League Championships, three Hyundai A-League Premierships and one FFA Cup  – breaking records along the way as Sydney FC swept all before them in 2016/17 and earning more accolades as a Sky Blue than anyone else. He will go down as the club’s greatest ever player 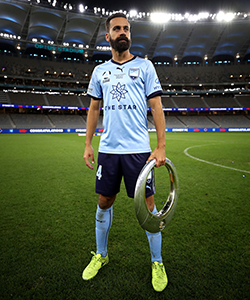