Sydney FC defender Alex Wilkinson believes the current Sky Blues squad has all the makings of a title winning side, as he prepares for Friday’s Big Blue at Allianz Stadium (kick off 7:50pm).

Having been involved in Championship squads in the past, Wilkinson said Head Coach Graham Arnold’s current crop of players could be successful, as he labelled Friday’s clash as one of the biggest of the 2016/17 season.

“I think this is one of the best teams I’ve played in,” Wilkinson said.

“The depth we’ve got in the squad is very very good, Arnie has done a good job recruiting and there’s at least two players who can play every position.

“That builds competitiveness at training and raises the level in games. This team one has the makings of a very successful one.

“Both previous games this year have been really good exciting games, it’s 1 v 2 again, a lot of pressure on them, they have to win to bridge the gap, they’ll be looking to come up, play attacking football so it’s got all the makings of an exciting game.” 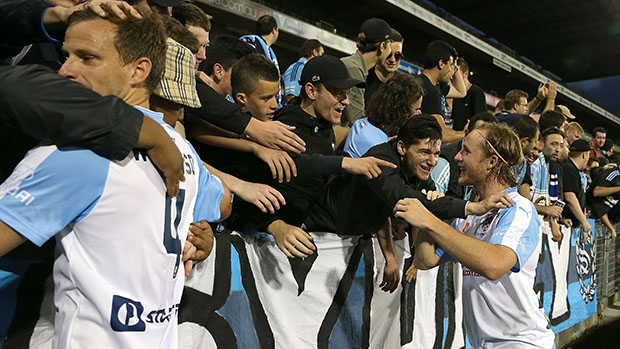 Wilkinson said the Sky Blues would be drawing confidence from their performance against City last Friday, and said with continual improvement another three points will follow on Friday night at Allianz Stadium.

“I think the confidence has been high all year,” Wilkinson said.

“It started in preseason when we had a great preseason and when the season proper started we had a good roll.

“The belief and confidence grew and grew from there and now no matter who we play, where we play, we go into every game expecting to get three points.

“The City game was no different, it was a good performance and if we can build on that performance it’ll be good going into the Melbourne game.

“It’s an exciting game and it always is when we play Melbourne.

“We’re looking forward to it but for us it’s just another game, and after last week’s performance it’s about building on that, improving again and if we do that we’ll get three points.”